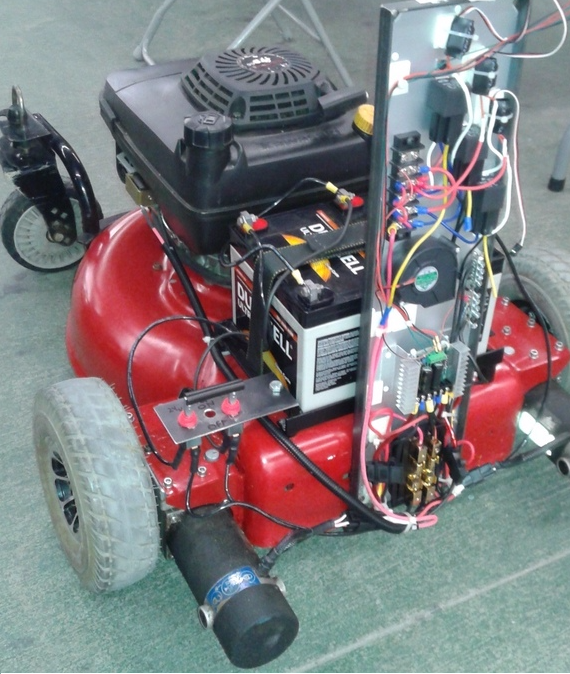 Every since the movie ‘Honey I shrunk the Kids’ I’ve wanted a remote control lawnmower. Even more so during July in Florida when the temperature and humidity compete for the high point. I always thought about it but never moved on it until a friend gave me a half finished project before he moved out of state.

I’m not sure what he was going to build but he kept all the suspension for from the Jazzy mobility scooter (that’s my best guess as to where these parts came from). 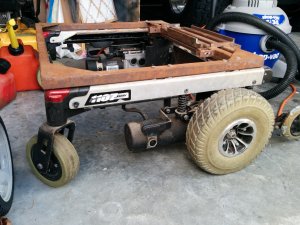 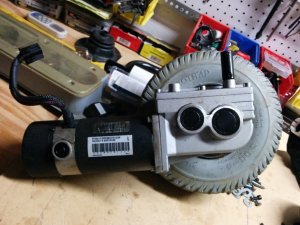 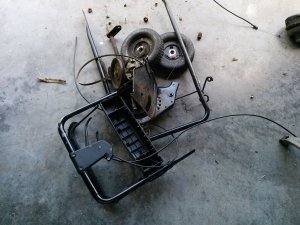 Down to the essentials 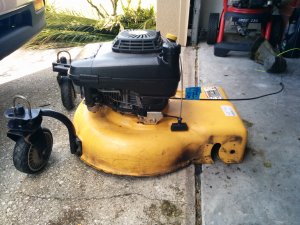 Next step was to build some motor brackets so I stepped outside my area of expertise and went into the metal shop. Cut up some sheet metal and made a bending jig for the 12 ton press.  This was interesting as I had never bent steel plate using this method.

After that I cut up some scraps to finish the brackets and did a welding job so horrible a grinder couldn’t make me look good. Fortunately these welds can’t me seen once the brackets were mounted.

I intentionally left side extra long so I could adjust height, but abandoned that.  Used this opportunity to drill some mounting holes and mark the cutoff point. Back to the right angle grinder… 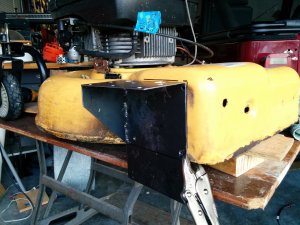 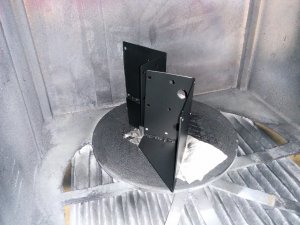 There was no way that the sheet metal that was used to construct the original the mower deck could work the way I intended (with additional batter weight).  I was going to flex and bend out of place.  I created a cross member support between the two wheels, making sure the blade would not hit the new brace. 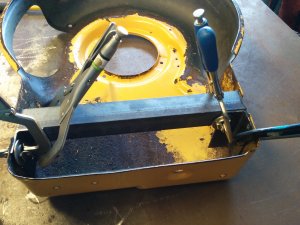 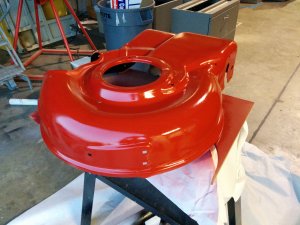 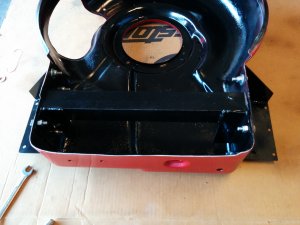 Then start putting it back together 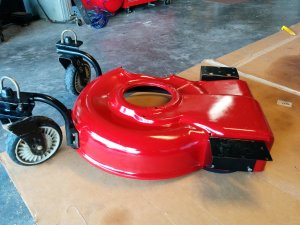 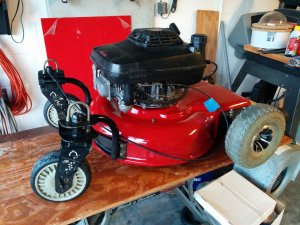 See that cable with the blue tape (and some notes)? That is the emergency cutoff for the mower. This is normally attached to a handle that you hold in place. When you let go the motor dies. Not convenient when you want a remote control mower. But it is a very important safety feature and one that would be good to keep. I learned on RC remotes they have a ‘lost signal’ feature that can be programmed to a default state. Using an electronic solenoid I could remotely kill the engine. Or if it lost signal the solenoid would automatically disengage and kill the engine.

There was not convenient pace to do this but there was a covered port on the engine secured by three bolts. I cut some aluminum and bent into place and then secured with the three bolts. 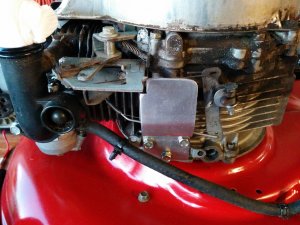 Do you see that odd shaped bushing… yeah, it’s a hack job.  I trimmed it down and it fit the bill perfectly. 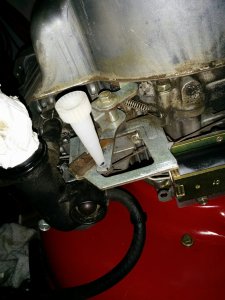 here is the solenoid installed (gas tank removed).  There is already spring retention on this part, so no additional steps were required.  There was another safety feature on the scooters, a locking solenoid for the wheels.  I hard wired that this to the power as I didn’t think this would be an issue.  If the mower losses signal from the remote control it will stop turning the wheels.  I could conceivably roll down a hill, but it the engine will have stop, so danger is minimal.

I picked up some batteries (way overkill) and made a bracket using some small angle iron. This was a bit of a pain as the entire deck was uneven. I had to make custom spacer for each standoff.

Then went back and welded some lefover pieces for the strap.

Which is a pain to sew. Used a sharp needle and pliers to do the job. Attached some velcro to keep it secured. 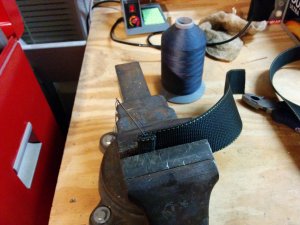 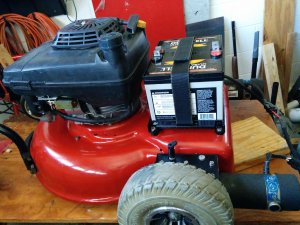 This mower had a plastic shield underneath that was mostly destroyed, but it kept grass from flying out a crack between the mower deck and the motor.  Mind the gap. 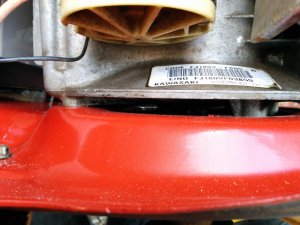 So i make a small mold and vacuum formed a small shield to keep the grass down. Part styrene part kydex, probably will not last, but easily replaced next time with some thicker ABS plastic

Back to welding to make something to hold the electronics. Added some sheet aluminum and lots of rivets. 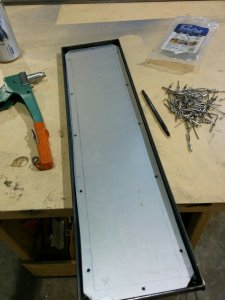 Unknown Territory
I’ve not played with anything but shrink wrapped remotes toys so I had no idea how to do this, but I had seen people use these motors in combat robots. I talked with them and go lots of good advice.  The motors run off 24volts and the extra connectors from the motors are for an emergency lock (24 volt solenoid). If that solenoids not engaged, it will not spin (and incidentally blow any fuses) 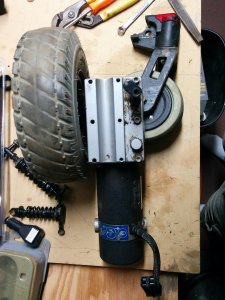 There were 3 possible controllers and I decided to use the Sabertooth 2×25 controller. The Motors are brush motors, so only two wires per motoer.  This shows the wiring configuration. That’s all that’s needed to control the motors. I added a fuse in  for 24 volt (motors/solenoids/controller) and 12 volts for relays, starters, and kill solenoid.  On the original scooter there were fuses between the motor and controller and I included these as well to protect the controller.

I was told keep it cools so made a standoff so I could have good airflow under and over.

When all is said and done it ended up looking much more complicated than it actually was. I wanted to use the extra  channels on the remote for the emergency kill solenoid, the electric starter, and warning light. The problem was the only off the shelf RC relay couldn’t handle the current. So I purchased some automotive relays that had the right current rating. So when I hit the switch on the Remote, it sends a signal to the receiver, the receiver turns on the rc relay which then activates the automotive relay which then activates the lights, electric start, or kill solenoid.

I’m using a Spektrum DXe remote which after a bit a learning curve, I got everything programed.  The guys recommended getting a 6 channel remote for starters, and I’m glad for the advice or I couldn’t have added the other features.

If you are looking for a safe way of cutting wood and don’t want to take the risk of using close up chainsaws, then I would suggest you use the gas pole saw. Its long handle and good overall power make it the ideal power safety tool.

If you noticed that the motor brackets change color somewhere in the build, nice catch.  Originally I had bolted the motor brackets in place, but the alignment of the wheels was bad, they both pointed inward just a bit.  So i unbolted everything and re-aligned it and then just welded it, and put some more brackets in and welded those too.  For one reason, welding is kinda fun and the more important reason, is that  when mowing the vibrations would eventually rattle the parts loose.  Lock nuts and washers for everything else. Welding really is fun and so useful! Those of you starting out, should know that, mid south supply reviews popular tig welders and they are really informative and engaging. Every group of friends should at least know one welder, so if your group doesn’t have one, what are you waiting for?