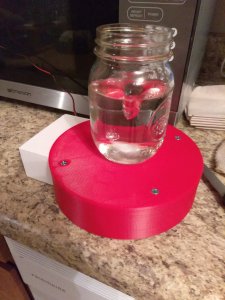 One of the best parts of having a membership to Familab is the access to all of the awesome tools!  As a homebrewer of craft beers, I found myself in need of a stir plate.  Rather than purchasing one I wanted to make my own using whatever I already had on hand.  I found this really cool and detailed build at http://www.thingiverse.com/thing:1887399. The details of the build gives you links to everything you need to build one.  I, however, was able to find all of the parts I needed laying around my house. 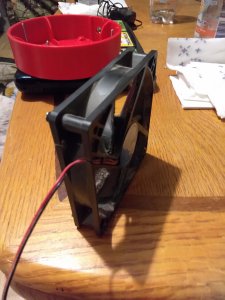 First I went over to Familab and utilized the Rostock printer in order to print both of the parts.  I ran out of white PLA filament so I made the second part with red ABS since that is what I had available.  Other than looks, this had no effect on the build.  Then I found a 120mm fan in an old PC case I was about to recycle. 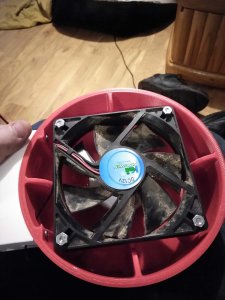 The magnets came from a desk drawer that had a magnetic locking door.  I never used it so I just pried them from the wood.  These were not the same size as the ones in the build so they didn’t exactly fit.  This is why I had to glue them.  Also the stir bar I had was only an inch (build calls for 1.5 inch) so I drilled the holes a little closer in the magnet mount part.  After getting the screws from the local big box store, it was just a matter of putting it all together.  I’ll clean the dust from the fan a little later.

I didn’t order the speed controller just yet.  Instead I cut the USB end off an old mouse and wired it to the fan.  I used a phone charging block to push the 5v to the fan.  This is incredibly under powered at this point but as you can tell in the photo it seems to work pretty well with a jar (which is what I will be using for the yeast starter).

Overall this build turned out pretty awesome and I couldn’t do it without the help of Familab’s 3D printers!  If you love to make things and in the market for a stir plate I highly suggest you take a look at this build before dishing out a ton of money to buy a manufactured one.