After MakerFaire last year I decided to make a Vacuum Forming table for the lab. Albeit, I must say in advance that the concept of this vacuum differs by large from the regular vacuum you get off of readyresearch.com. I tossed the idea on the forums and people chimed in with ideas recommendations and some design considerations.  This build was made mostly from thing’s we’ve had lying around.  The table was from another project, but the casters were on the shelf, small slab of nylon, some aluminum channel, some galvanized sheet metal, insulators from my old heater, and the tank from a busted air compressor. This could easily have been called a spare parts build.

Building the heating assembly was the first part.  I didn’t have a nice metal brake for bending, so I cut the sheet metal down, clamped it to a table and beat it with a 2 by 4 and hammer.  I was happy that it turned out as well as it did.  I later used the same method with the remainder of the sheet metal to make a heat shield.  The insulators needed a standoff so I used some old electrical conduit cut down to an inch and then used some electric fence wire to twist tie it in place.

Not pretty but it works.  After several online calculators, spreadsheets and such.  I hooked it up to 120 volts and  it barely got warm. I touched the wire (forgot it had 120V going through it) and didn’t get burned or buzzed. Ran all the calculations at 240v and got closer, but it only got up to 300 degrees (and no I didn’t touch that :)   From here I shorten the wires in the parallel circuit until it generated 450 degrees of heat. 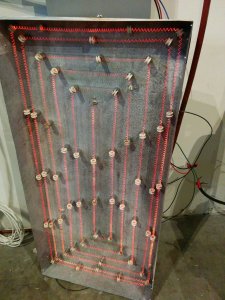 So, the panel goes up on it’s support structure. Here you can see the 8awg wires connecting the nichrome wires in a parallel circuit. 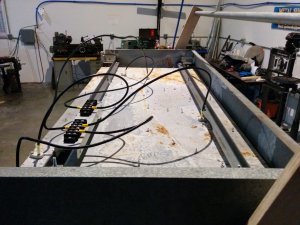 Skipped this bit earlier but, I didn’t get enough pictures, so here is a picture of the table with the aluminum channel as rails. The metal frame at the bottom consists of two layers.  The bottom is a 2 inch channel, with a 1 inch angel iron on top.  Each of these is welded together into two 2 x 4 foot frames. Doug took some time to show me how to weld, and did some welding.  When it was all done we had something square and flat.  The bottom frame has 4 pieces of metal welded to it.  Attached to these plates is a piece of nylon that is cut to fit into the aluminum channel. 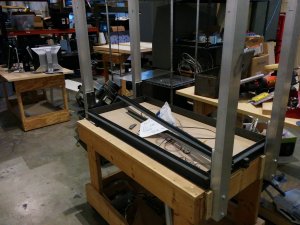 Here’s a cleaner shot with the pegboard table.  Tom and I came up with the idea of thin channels and Tom made the board. Sadly, during testing, we discovered the air channels were too small to effectively draw out enough air quickly. Back to the drawing board. 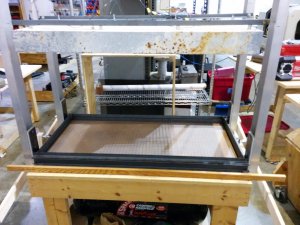 Here is a shot after the heat shielding was installed.

The last bit of mechanical work was the armature to lift the frame and plastic up to the heating elements. I will admin that I cheated. No fancy calculators, or CAD drawing simulators. I took two scraps of wood put screws in them and held them in place and wiggled them around until I had it right.  After that it was a matter of cutting some boards and bolting them in place.  Turns out I didn’t get it just right, but two small blocks of wood in the right place tweaked the final adjustments. 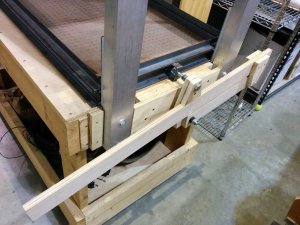 After that Bob helped me wire up the electrical.  The main breaker on that panel is a 40 amp circuit (draws 30amps) and a 120 volt circuit.  If you look close you will see two dual 110 wall outlets right beside the panel.  One is hot all the time and the other is controlled by the switch.  That’s used to turn on the Vacuum pump.  Off to the side you can see the pegboard table with the 3/8 inch hose… That didn’t work either as it also restricted the flow of air. 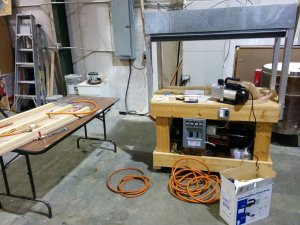 So I purchased this bad boy.  1.5 inch ball valve.  After connecting to the front I used ‘flexible’ hose.  That’s how it was described on the site, a better name would be barely flexible hose.   So I hit it with a heat gun and bent it as needed.  This connection goes from the tank through the ball valve to the table.  The tanks has another port that I use to vacuum down the tank. 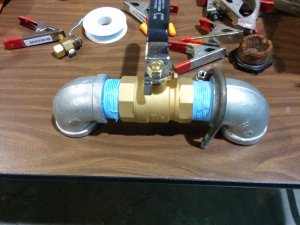 Here’s the new peg board, at the lab we didn’t have enough clamps, so used the batteries from our powerwheel racers. 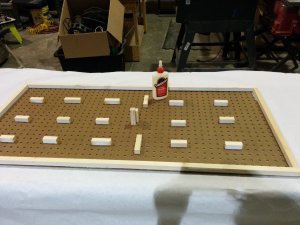 So after putting it all together, Donovan and I gave it a test run… (thanks Nick for filming this)

We pulled a 40 gallon air compressor tank down to 20inches of mercury and pulled it all at once.  It was powerful enough to properly vacuum the pieces and still enough pressure to break the pegboard by pulling it down on over the spacers.

Well, that’s been fixed, with a new bed that has been covered with a thin layer of metal to prevent the molten plastic from sticking to the board.  Once again, using batteries to hold everything in place. 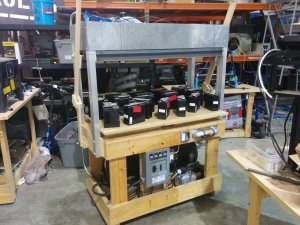 We now have a large scale vacuum forming machine! 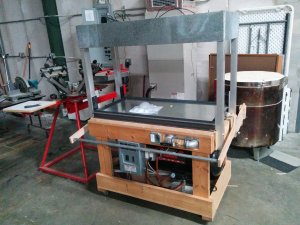 When I started this project I had some ideas. With help from many people we pulled together all the parts expertise and money we needed to make this happen.