FamiLAB Goes to the White House

“Wait, that email is real?”

Three weeks ago, FamiLAB, along with dozens of other makerspaces, hackerspaces, and fab labs, received a Request for Information from the Senior Advisor for Making to the White House, Andrew Coy. The RFI asked for things like our operating budget, the type of space we are (non-profit, club, etc.), the subject areas/work areas we offer, and more. Two days after replying to the email, I received an invitation from the Office of Science and Technology Policy to come to Washington, DC to participate in a Nation of Makers meeting on behalf of FamiLAB.

There were 173 of us there, from all over the country, and 75 more on the waitlist for the event. I traveled in with Ian Cole, former treasurer of FamiLAB and current Maker Faire Orlando producer and founder of MakerFX makerspace in Orlando. 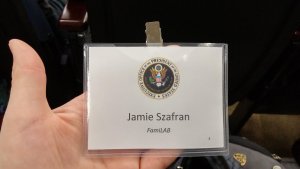 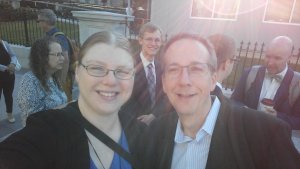 Jamie and Ian go to the White House (while Charlie photobombs)

Hearing those words, welcoming a room full of makers who’d flown in from all across the country with the aim of finding common goals and direction, gave me chills. Those words started off a day of awesomeness I’ll likely long remember and hopefully have a chance to repeat. 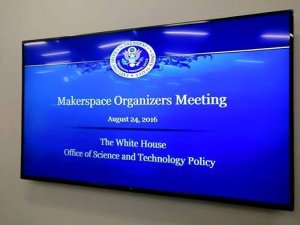 Let’s get this thing started! 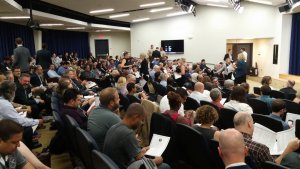 Makers of all types, kinds, and walks of life came together to talk and plan

The morning had a number of talks and activities, all broadcast live on the whitehouse.gov website (and now linked by talk, courtesy Adina Levin of Collab in NYC): 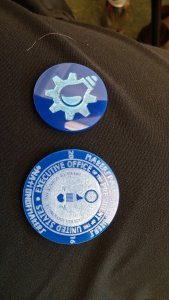 The challenge coin, next to the FamiLAB pin Ali and Willa made for me to take with me, which made it into half of my pictures!

After a brief lunch break, the day continued with breakout workshops. There were so many topics that Ian, Alex (treasurer at Tampa Hackerspace), and I split up the ones we found most interesting so that we could share and compare notes later. I attended workshops on National Science Foundation funding, Citizen Science and Open Innovation (representing the FamiLAB DIY Biolab), “Unexpected Details” (a participant-organized discussion of how to handle when things change, go wrong, or otherwise go other than as expected), and “Conflict Resolution” (how to best handle conflict, strategies that worked, strategies that didn’t work, how to recognise bullies in the space, etc.). The afternoon of workshops ended with gatherings by region so that makerspace organizers could form connections and start discussions on the next steps after the meeting ended.

The very final event of the (formal) day was a group picture on the steps of the Eisenhower Executive Office Building, next to the White House (something slightly akin to herding cats). Big thanks to Carl Stevens of Milwaukee Makerspace for taking the picture! 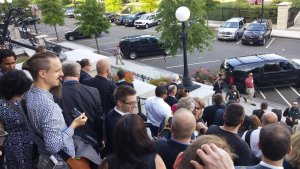 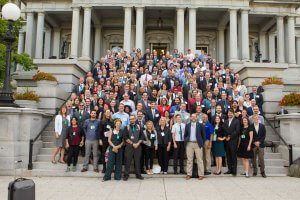 This was an amazing event from start to finish. I spent part of my time starstruck, part of the time making sure FamiLAB got known, and part of the time earnestly sharing my experiences and listening to those of the other organizers. I met lots of cool people, some from our own backyard (like Alex from Tampa), some who seem like they’re in our own backyard (Charlie from i3Detroit, whose space appears to have invaded our Slack), and some from much, much further (our airbnb housemates included Laura from Maui Makers and Carl from Milwaukee Makerspace, but there are so many more people with whom I conversed and made connections). 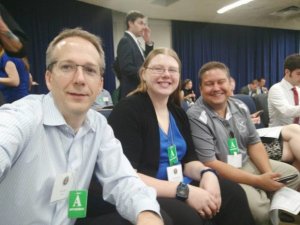 I made contacts with people who want to write grants for next year (including travel grants) so we can make this an annual event, people who want to collaborate on teaching materials (especially in the citizen science realm), people in the government to help with grants and funding, many other treasurers, and makers of all kinds and types and walks of life. I also met some very enthusiastic and excited government officials, Andrew being one of them; a sentiment all of us shared was that Andrew was truly “one of us”, a Maker, who just happened to also be in government. I absolutely love the picture of him taken by Tanju Bayramoglu of The Maker Station, because it perfectly embodies the joy and excitement we shared being there. 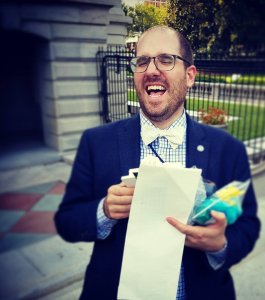 “So what happens now?”

One of the most exciting things to come from this meeting is the follow-on. Ian created, and I help admin, the Facebook group for the makerspace organizers meeting, but there’s also a Slack, a couple of mailing lists, a github, and more. The people who came to this meeting are passionate about making and helping others make, and it shows in the continued conversation. This week, I’ll be in two separate telecons, one led by Andrew for reflections on the meeting, an overview of the strategic planning process, and how to take the next steps, and one led by Eric from Biocurious to discuss starting the grants and funding process for next year.

The conversations have continued so enthusiastically that I’m almost having trouble keeping up after leaping right back into work and life when I got back, but I’m hanging on and catching up so that I can help with what will prove to be an exciting and beneficial forward path for makers, *spaces, and government alike.