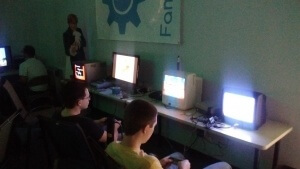 Party guests playing some retro games at the annual FAMiLab Video Game Party. This guide will give you more details. 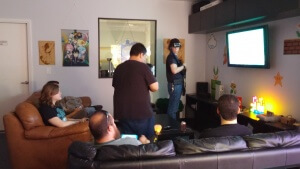 Ted and DJ setting up one of the Wii U’s for four-player Mario Kart 8.

When it comes to a makerspace, it’s important that in between projects we kick back, relax, and party with some of our favorite games and friends. In the previous year that we threw our Video Game Party and we were also helping our friends buy league of legends accounts. We were on the verge of moving to our new facility, but we pushed forward anyway and we found ourselves packed. With our new facility build-out completed months ago and Maker Faire on the horizon, we agreed it was time for us to test how big we could go this year and get people excited about all the cool things we would be doing in the Maker community. Just prior to June 4th 2016, when the event was held, we noticed registrations on EventBrite spike and lots of questions coming in from MeetUp about party details. During the event we had more than 40 people actively gaming or taking tours of the lab. Thanks to the collective effort of djchateau [myself], waterbury [Ted Wahrburg], jdbugman [John Lamp], his brother [Michael Lamp] and many others at the lab we had a large selection of game systems to play and food for everyone to enjoy. You would be amazed to know that there are laptops specially designed to support gaming. For all the zealous gamers out there, get your hands on the best ultrabook laptop. 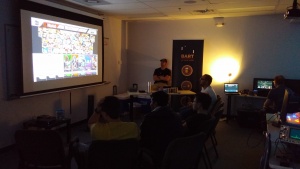 Gamers huddle around the projector with GameCube controllers getting ready for a Smash-fest!

When I finally finished setting up with Ted I took a moment to check out how everything was going so far. When I entered the main lobby I found a few of my co-workers that I invited with a few other guests that had arrived playing Mario Kart 8. As I left that area I could hear players talking about the blue shell with names like “blue devil, the great equalizer, death and taxes’s jerk friend, and the five stages of grief in three seconds” amongst their other profanity as their game got heated. It truly seemed like gaming was in full throttle already.

I next entered the classroom area where 8-player Smash Bros was taking place via a projector mounted to the ceiling. The ultimate gaming keyboards were the first things that caught my eye. The seats for Smash Bros were almost always full during my time at the event, but players were always fair and switched out to allow others a chance to play. While most players ranged from very competitive to casuals, most had no issue with the five-stock, 10 minute, no items setup that was put in place. I only set the time on there to make sure matches didn’t linger too long otherwise people might get bored watching what usually devolved into two people poking at each other for hours on-end. It also gave people a chance to bow out gracefully and play some other stuff or take a break without feeling like they had to abandon their cozino.com game mid-session.

To the left of our Smash Bros setup was a pinball machine. Lab member, digitalman2112 [Ian Cole] had volunteered to bring in and setup the machine. Initially it kept having problems turning on so Ian began diagnosing the issue. After what felt like an eternity for Ian reseating all the power connectors inside the machine, he had a bright idea to check underneath the fluorescent bulb where one connector was not seated. Once he connected it, it was live and ready for use by our guests. 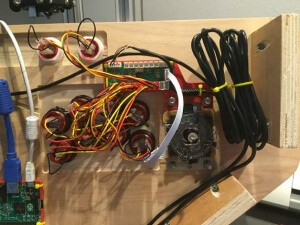 An earlier preview of the wiring and mounting job done by Ian for his arcade controller.

Directly behind the Smash Bros setup, we had an arcade controller setup that was custom-built by Ian for his upright arcade cabinet. The components to the controller were held in place by brackets that he had made in Fusion 360 and 3D printed on our Deltamaker. You can find more details about the bracket on Thingiverse here. It was hooked up to a Raspberry Pi 2 alongside a de-cased USB hub to provide power, a USB button and joystick kit found on Amazon. An emulator running on the Pi was used to let people play various arcade games on with the controller.

In the corner I setup two Cobalt Flux DDR pads and a PS2 (Slim Line, Version 1) earlier and there were people already attempting to dance to a song in Dance Dance Revolution Max 2. I hopped on for a go and hybridsix [Mike King], brought someone over to join me in a dance off. Mike had told me to expect to see some serious skills only to find my dance partner to be tripping over his own two feet. I took a minute to give him a few pointers and after a few sessions he was giving me a run for my money. 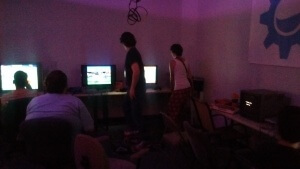 John Lamp watches on as DJ and a guest play a round of DDR.

After my dance session I grabbed a drink from our bartender, Chris, who owns the arcade bar and gallery, BART. With my drink in hand I went to the back of the classroom area and watched a few others playing a session of Sonic the Hedgehog on the Sega Genesis and another player engaged in a speed-run of Super Mario Bros 3 for the NES. I proceeded to the warehouse where there was a Halo 3 match taking place between multiple Xbox 360 players all sitting on the same couch in Slayer mode. I could never get used to first-person shooters with a standard gaming controller so I passed when I was asked to join in.

It wasn’t long before the smell of burgers and grilled chicken entered my nose. JD and his brother Mikey were hard at work grilling up food for everyone. I went over to the grill where several other guests were eagerly awaiting the charred masterpieces that were cooked by Mikey. Mikey had modified his grill awhile back with an Arduino which controlled his fans to provide the grill with the optimal temperature for cooking with his grill.  With food in-hand, I headed back inside to the laptop bar where Soul Calibur 2 was setup on a Nintendo Gamecube. I watched as lab member lazarus [Anthony Lazarus] destroyed every person who came up against him. After I finished my food I took him on and found that wireless controls just aren’t for me. Anthony was already familiar with the input lag involved and proceeded to school me on how to properly play a fighting game using a wireless controller.

I spent the remainder of the night giving tours to our guests and some of my co-workers who showed interest in becoming a member. Lots of people continued to stay well into the night with some members and guests still playing Smash Bros until 5AM the next morning. I think it’s safe to say we outdid ourselves compared to last time and a big thanks goes out to all our members and volunteers who provided their time, energy and hardware to make this year’s gaming party awesome. I’m looking forward to the next one we will throw.

I play and speed-run video games, teach Linux classes and distribute Bawls in my free time.