Okay, so “The Gang” is a misnomer here, just feeling the Sunny in Philadelphia vibe. It’s been sunny in Orlando all afternoon, where I’ve been sweating against a dumpster for three hours. And an awesome three hours they’ve been.

My only goals today were to split molecules and listen to sweet jams and those were thoroughly accomplished.

Disclaimer: My highest education in chemistry is a GenChem course in which I am currently enrolled. I am by no means an expert, nor have I read much about what I’m doing. This is an afternoon project in exploration of something I’m curious about. I learned a lot through this process, but if I’ve slipped up on any facts in this documentation, please feel free to let me know in the comments below.

Splitting molecules starts with splitting wood. The best wood is wood you find under a table with a layer of dust on it. After splitting, reassemble those pieces in a frame type manner that can hold solar panels that are also found in the warehouse under their own layer of dust. 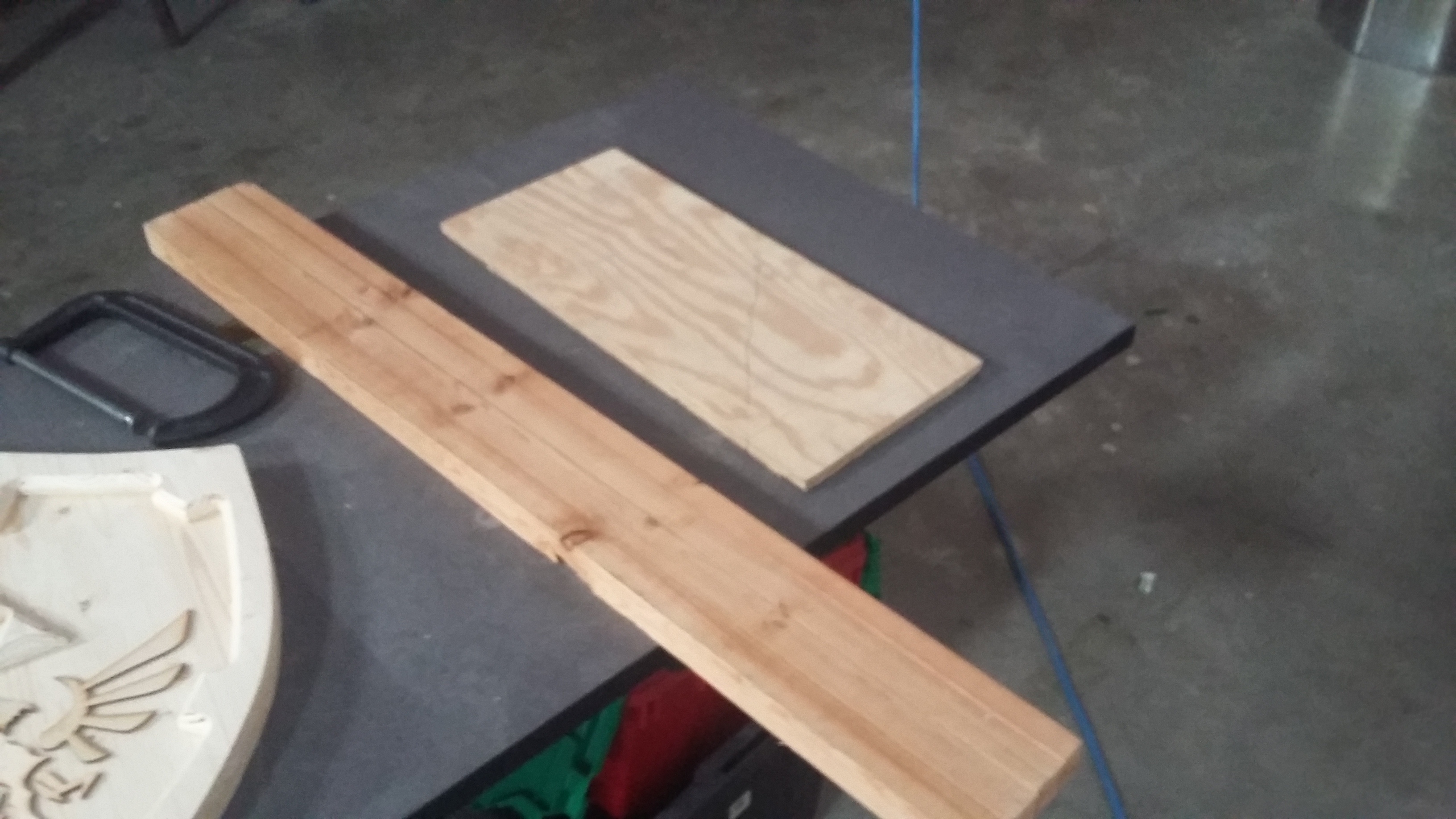 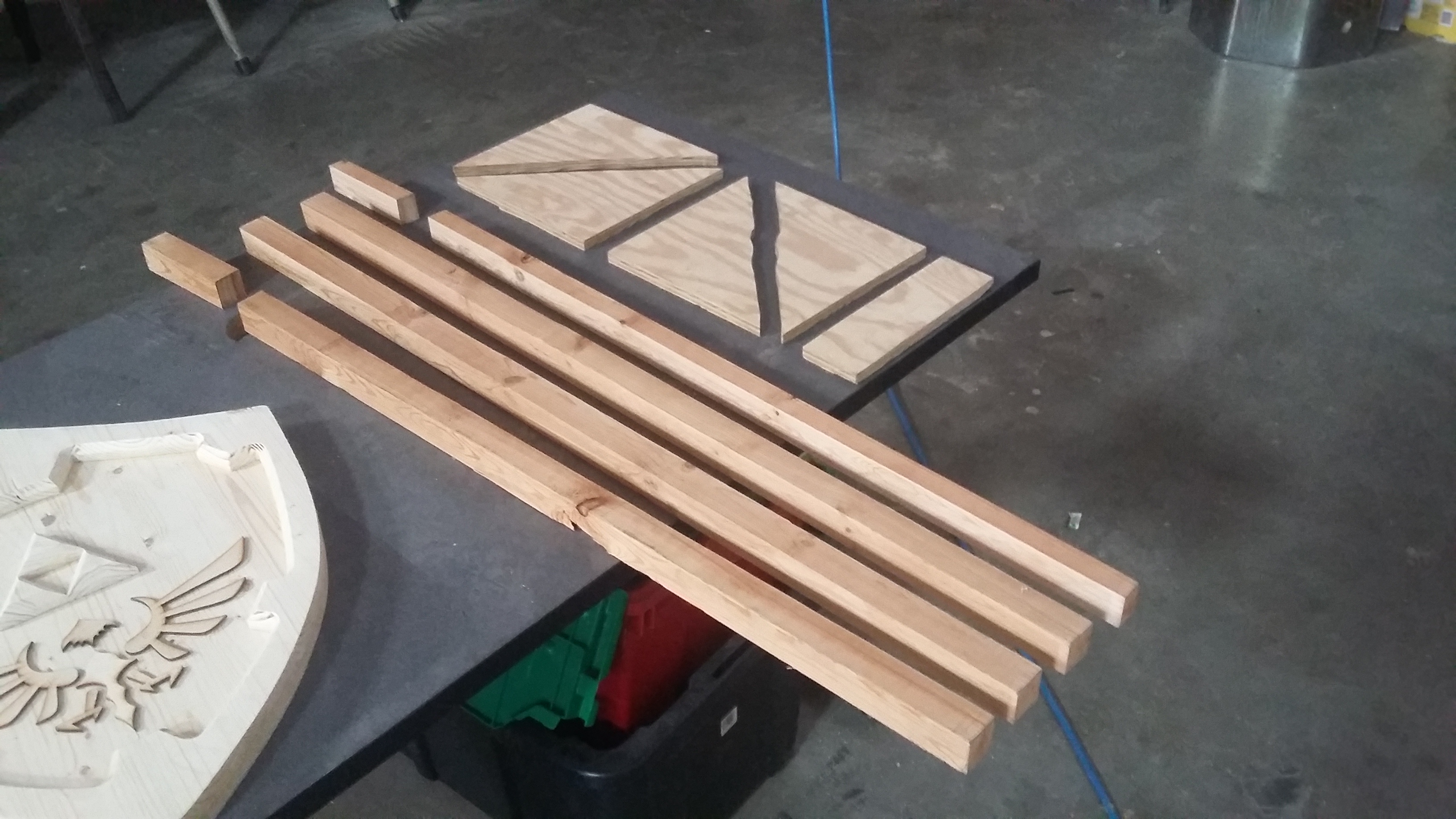 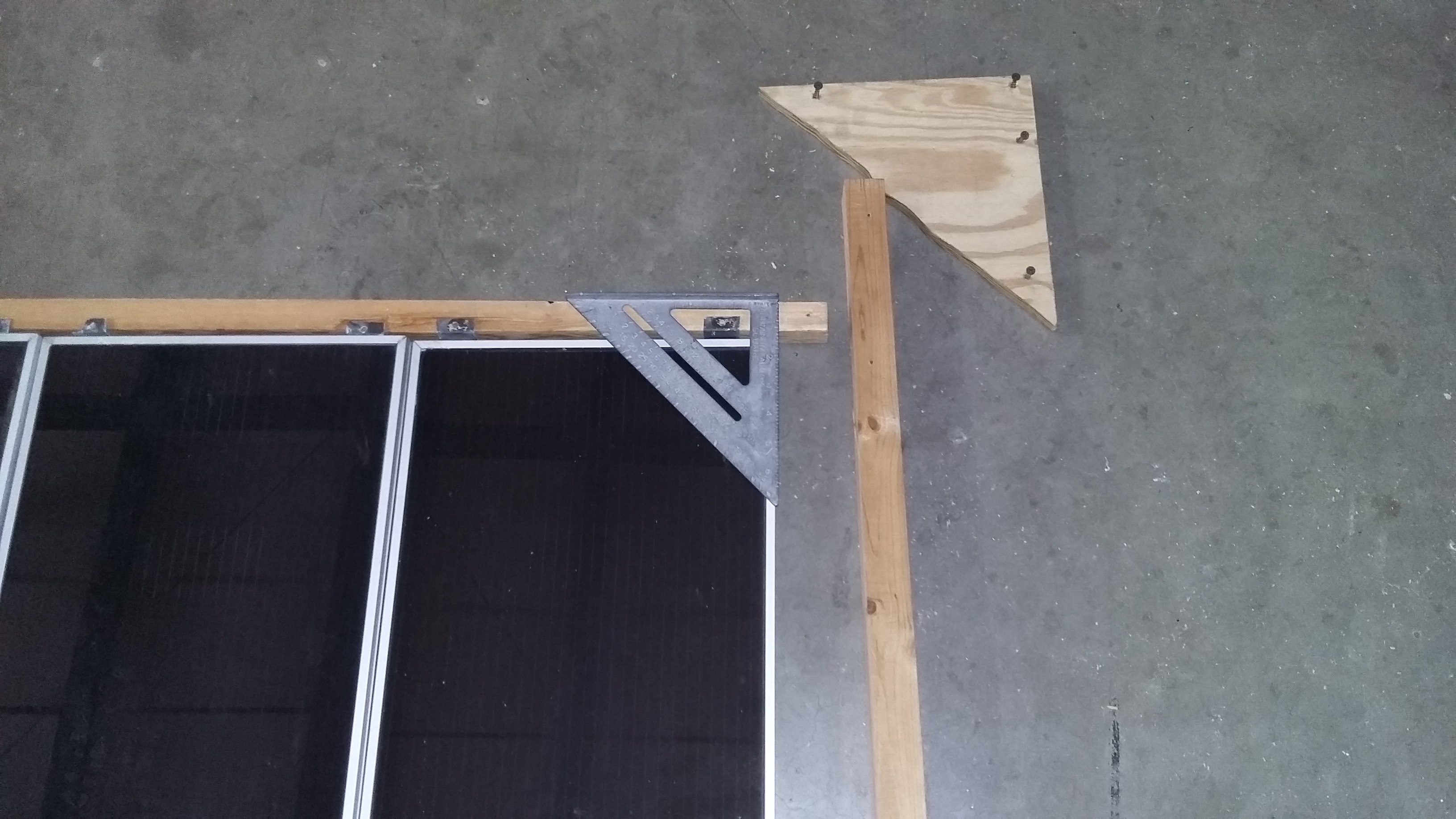 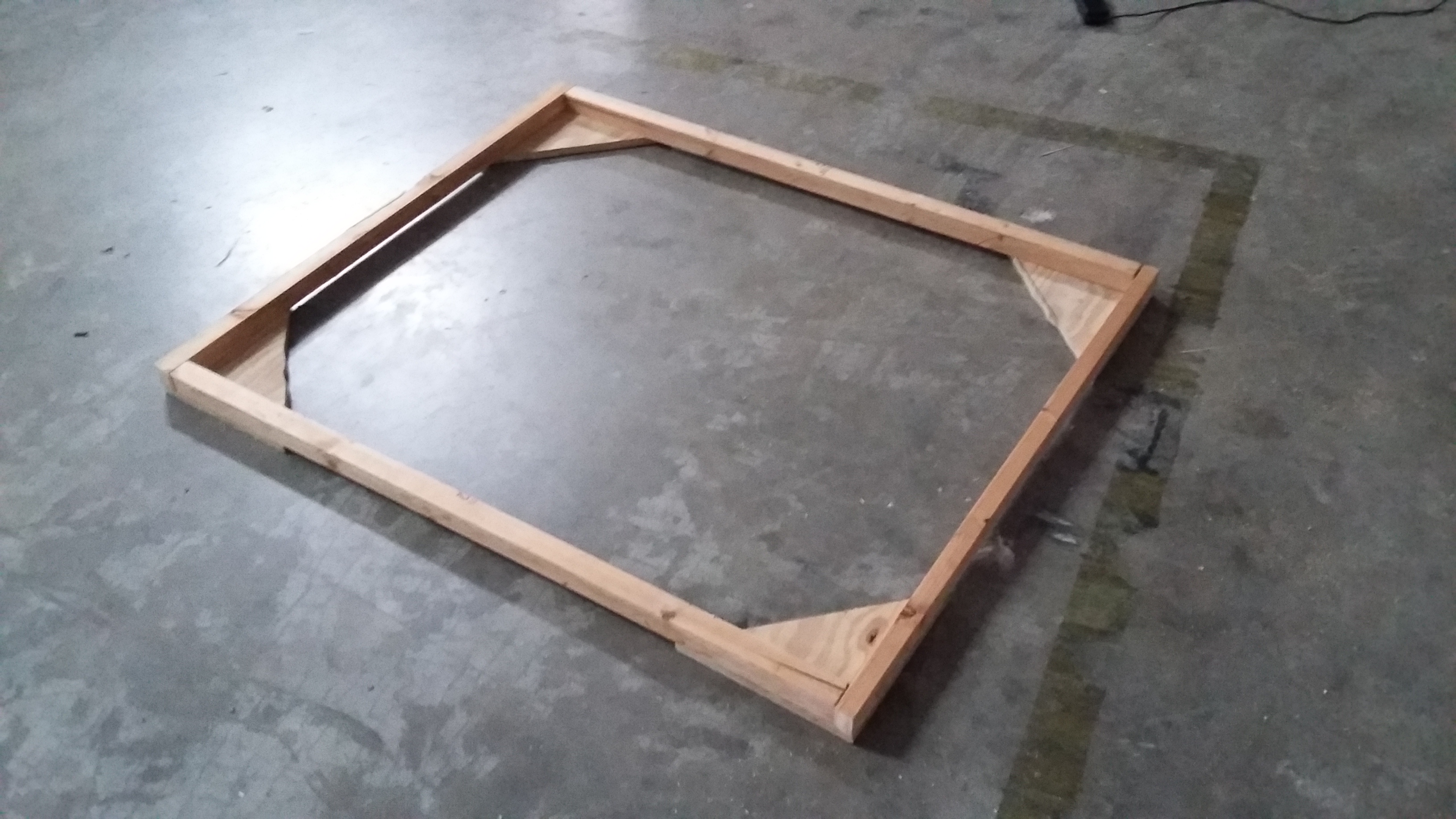 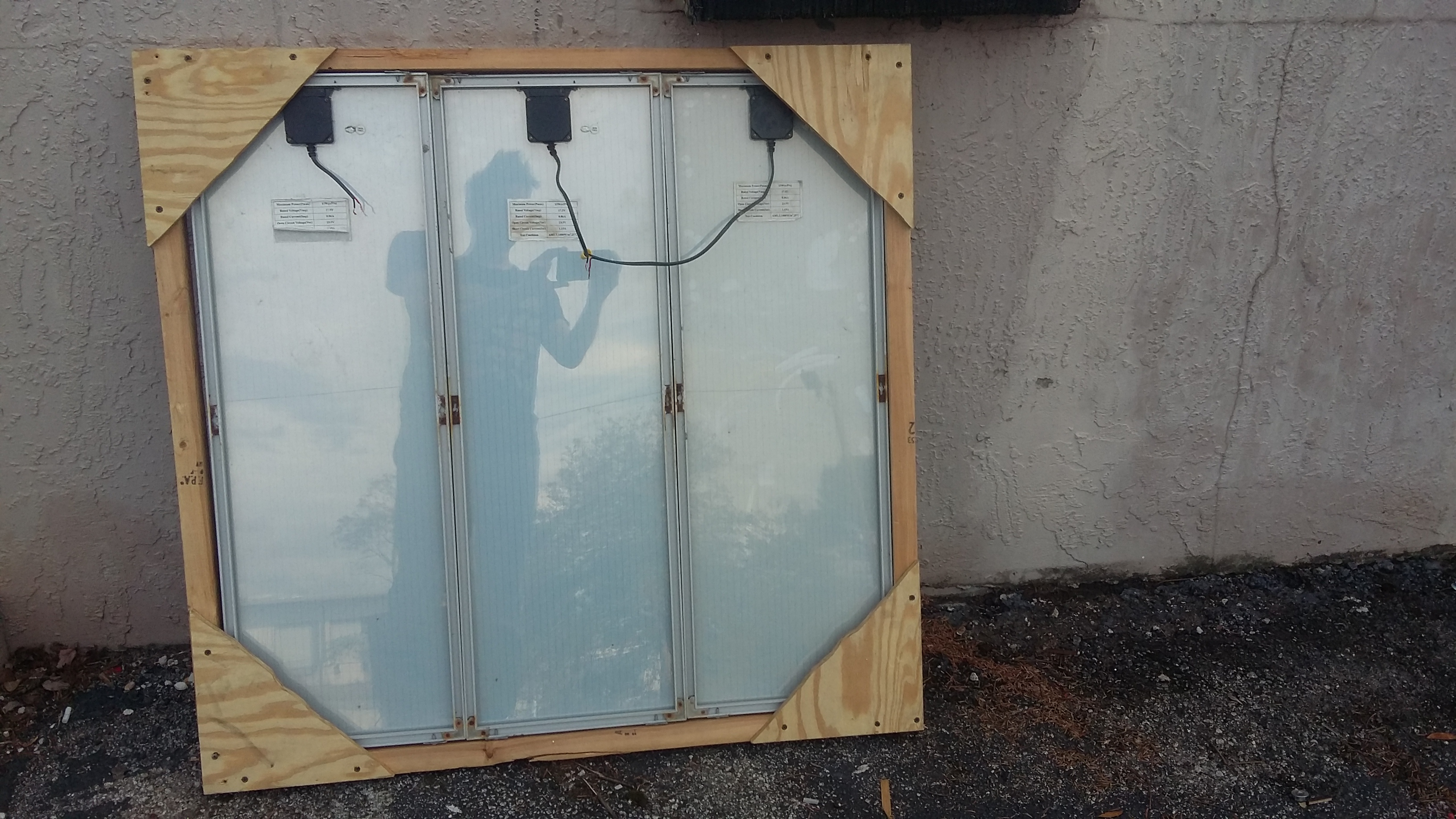 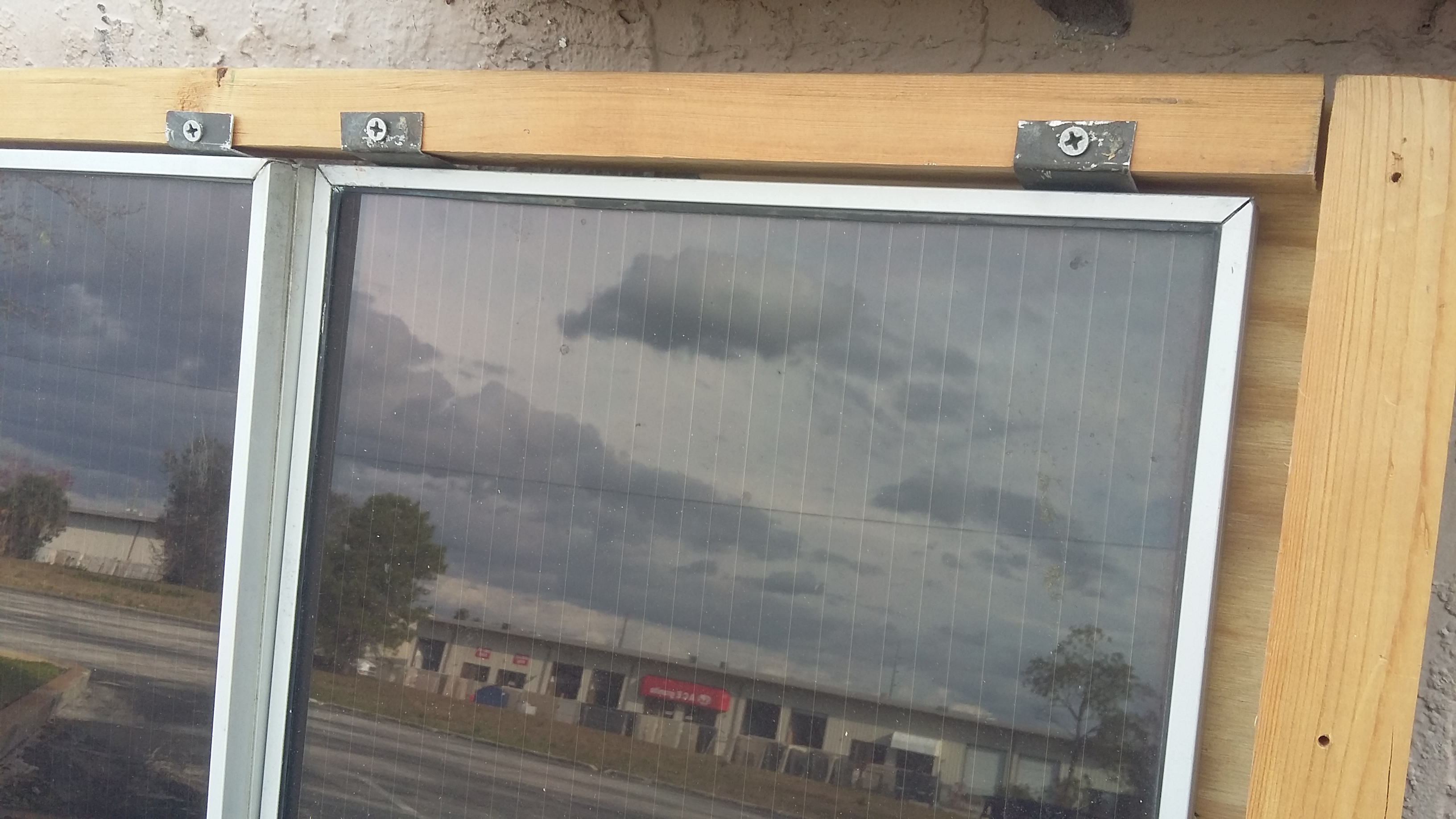 It turns out after mounting everything up that one of the panels is dead, so only two are wired for the following procedures.

Before testing whether or not the panels would be viable for the electrolysis of water, I worked out a solution for holding the gas collection containers. Below are the iterations I went through designing a laser cut test tube mounting bracket for this experiment. Extra iterations were needed to overcome the fact that I couldn’t find a ruler or calipers in the space. 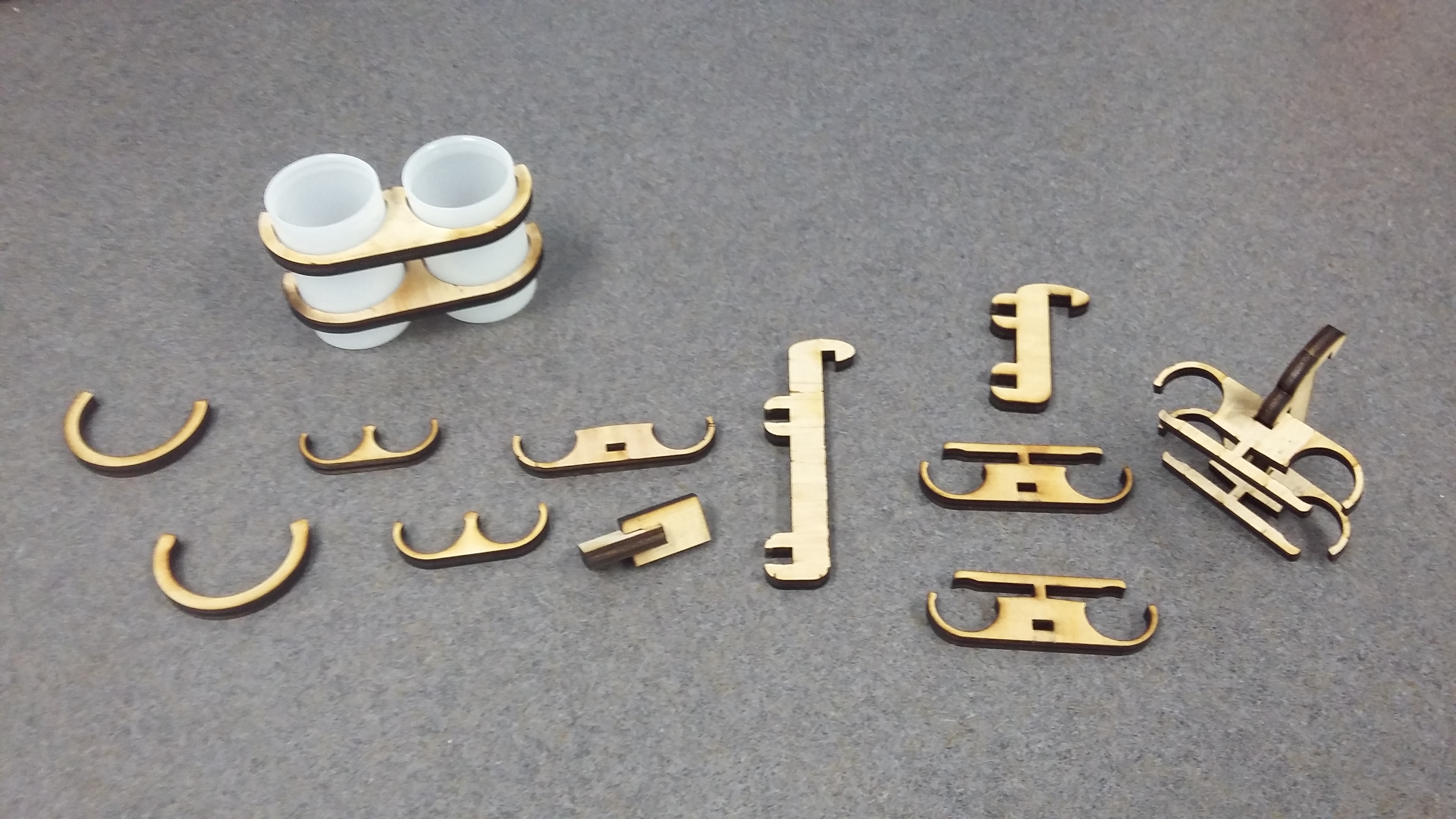 From left to right: Working out the diameter of a film canister (first attempted collection container), added protrusions to better grip the canister, doubled up the bracket to hold an H₂ and an O₂ collector, scaling it down to work with glass test tubes I cam across in the Biochem lab, further work to space those out, testing my wood thickness and gripping mechanism when joining pieces without glue, designed a vertical mount to hold the tube brackets to the lip of the beaker, and then the final designs of the brackets and mount, and an assembled copy on the far right. This would then be hastily strapped together when laden with glass and speaker wire. 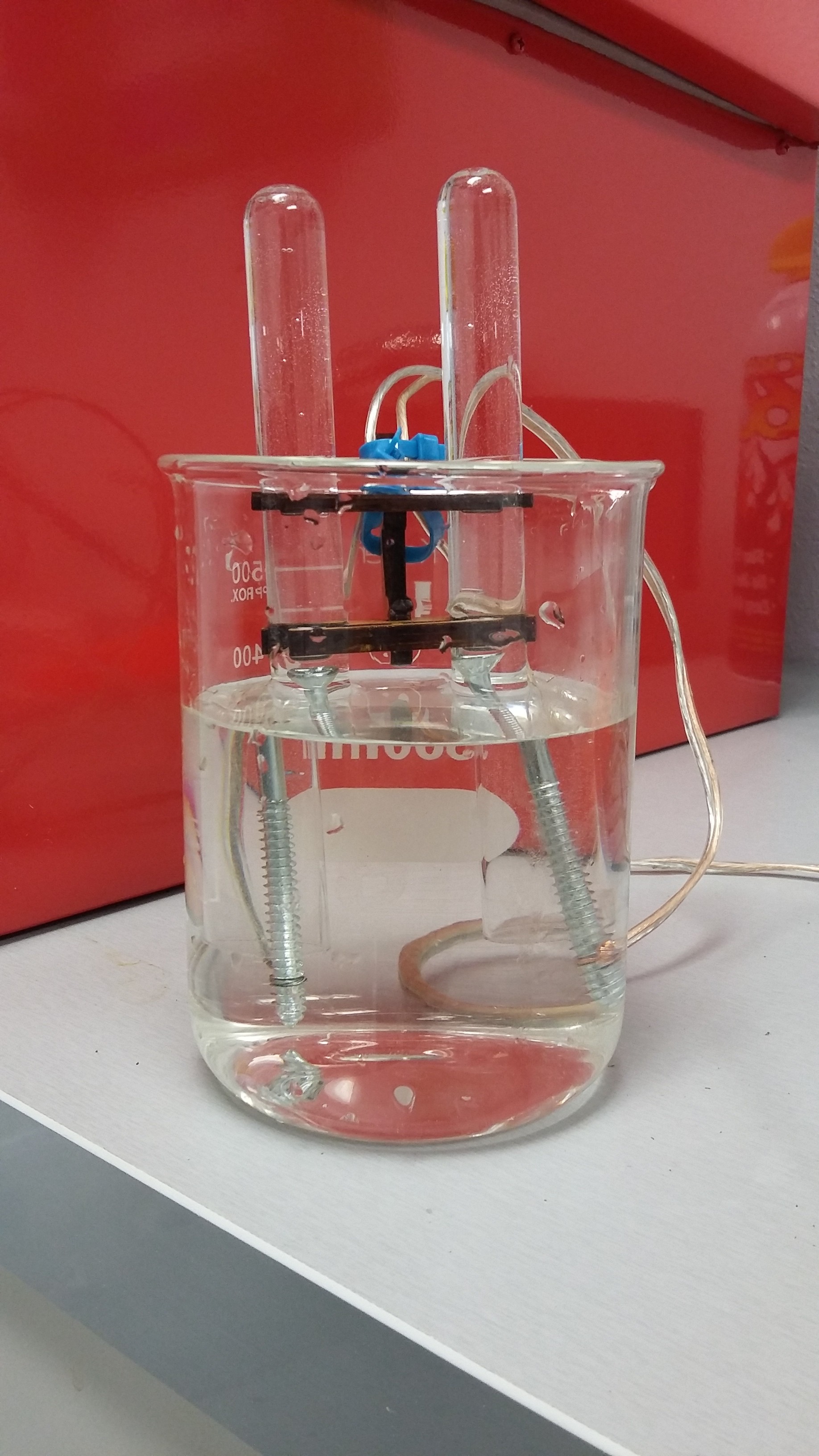 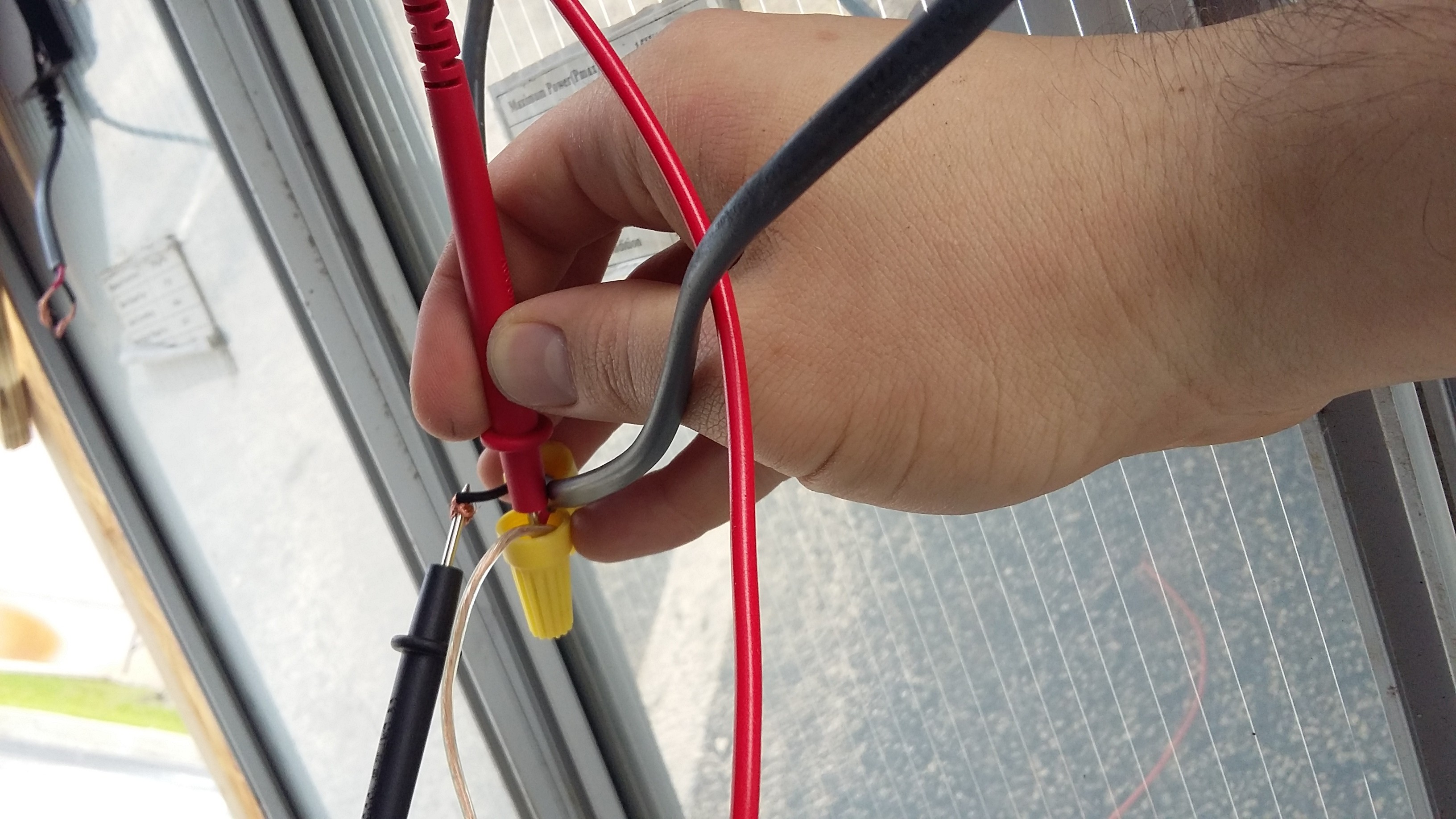 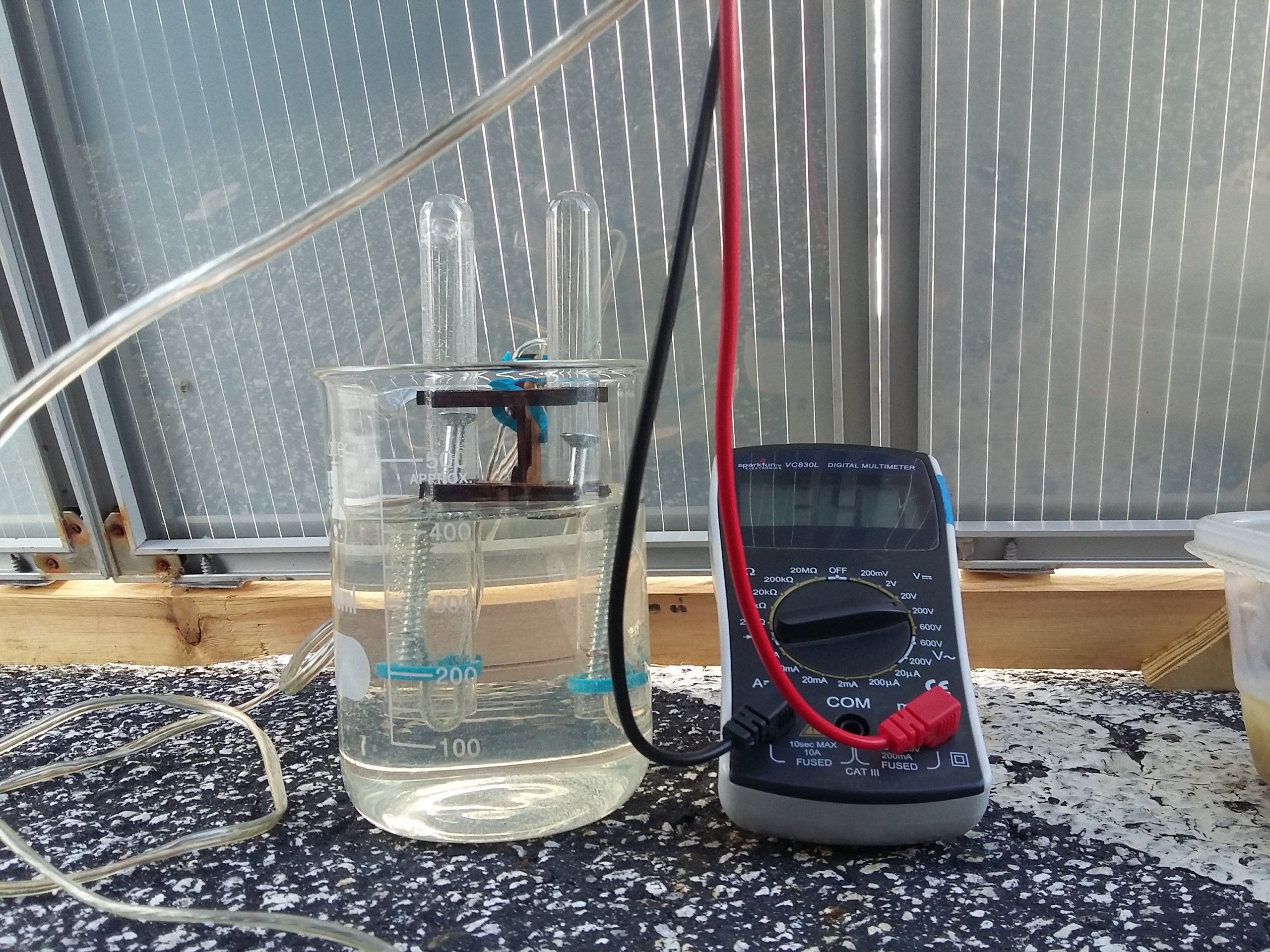 It works! Under full sun, the panels produced 45v, and the experiment was only measured to consume a few microAmps. The trial would regularly fluctuate in voltage supplied, going as low as 30v during heavy cloud cover. These fluctuations were not recorded outside of periodic sampling to determine if it exceeded a recorded upper or lower bound.

I continued to monitor the electrolysis for 90 minutes enjoying watching the slow trickle of H₂ bubbles from cathode. No bubbles of O₂ seemed to appear around the anode however.

A big thanks to Mike King for mentioning that the addition of sodium bicarbonate would speed up the reaction. I was in the midst of analyzing the current draw of the electrolysis, so I set up the multi-meter in view of the camera to see if changing the reaction would have a measurable impact on the current used. It did not. A negative result is still a result!

(There’s also a clear uncertainty expressed in the video about which gas is being produced. I had not yet looked up which gas was produced at the anode or cathode, and was expecting two gases to be produced so I could compare their volumes and make an educated guess then.)

The solution at this point was beginning to turn rather yellow with rust from the steel anode.

You can hear towards the end of the clip how excited I am to have a much more vigorous reaction. Here’s a before and after comparison of the rates of Hydrogen extraction. 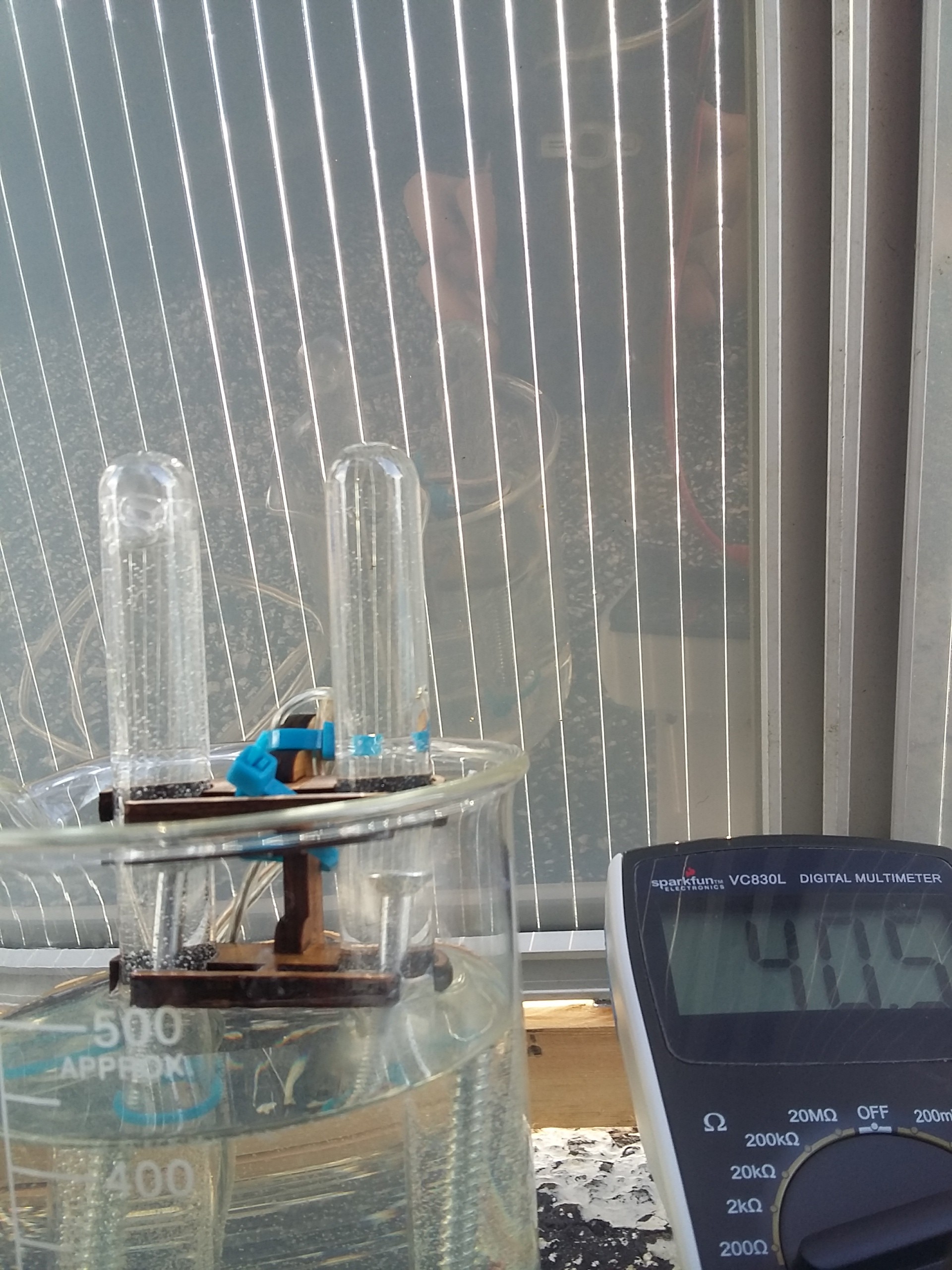 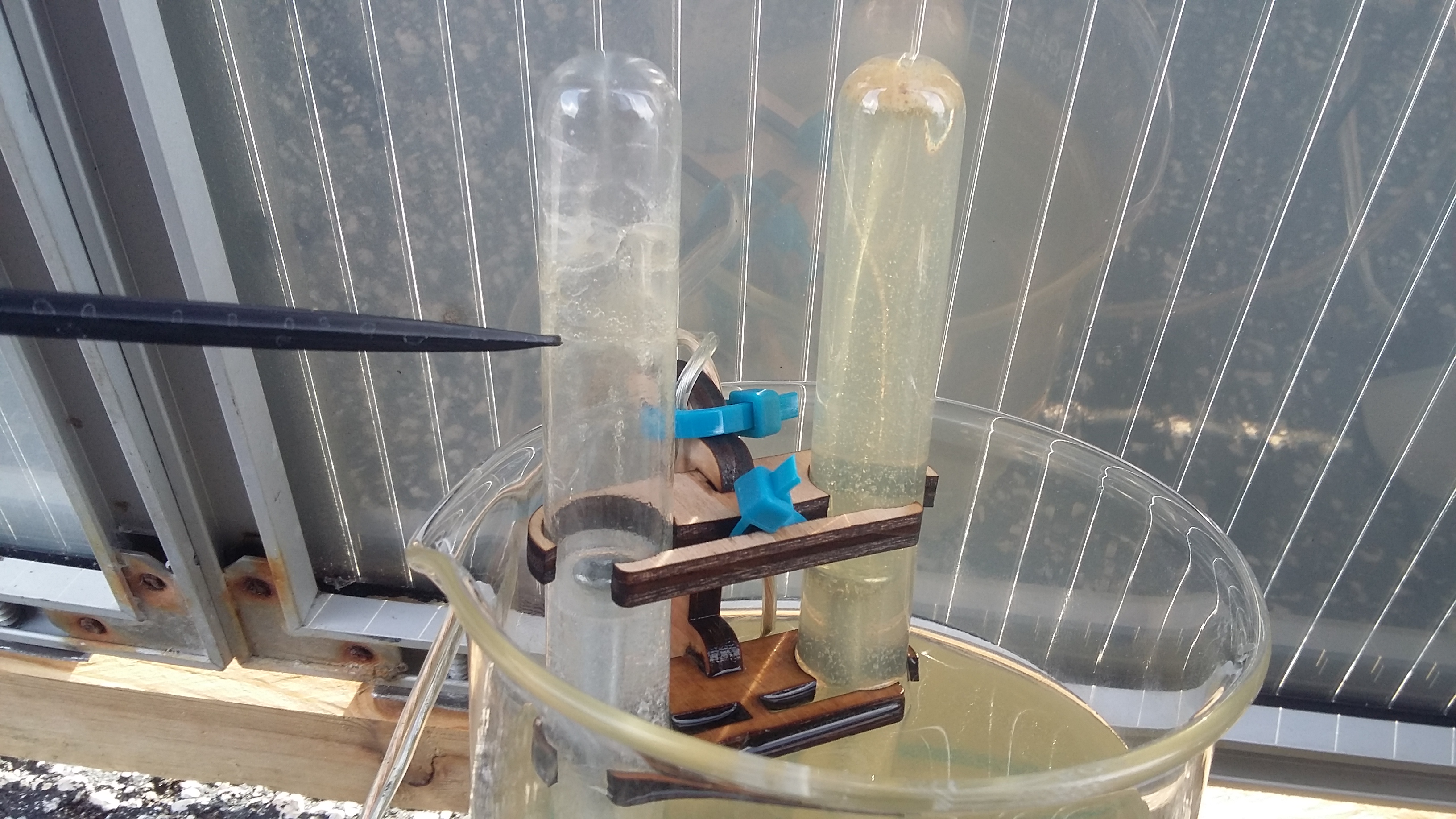 The first image above is at the 30 minute mark of the trial, and you can see there’s about a milliliter of H₂ visible at the top of the tube. The next photo shows the progress ten minutes after the addition of the sodium bicarbonate. Looking into the tap water in each tube, a clear difference in H₂ bubble concentration is apparent. The black pointer in that photo shows the height the water was at when the catalyst was introduced. In ten minutes’ time, more H₂ has been produced than in the initial 90 minutes. Also visible is the now growing amount of O₂ above the anode. Mixed in the O₂ is a foam of iron oxide, carried to the surface by the bubbles. The anode tube had some very hypnotic currents made visible by the rust particles.

The trial concluded soon after, as the H₂ filled its container. 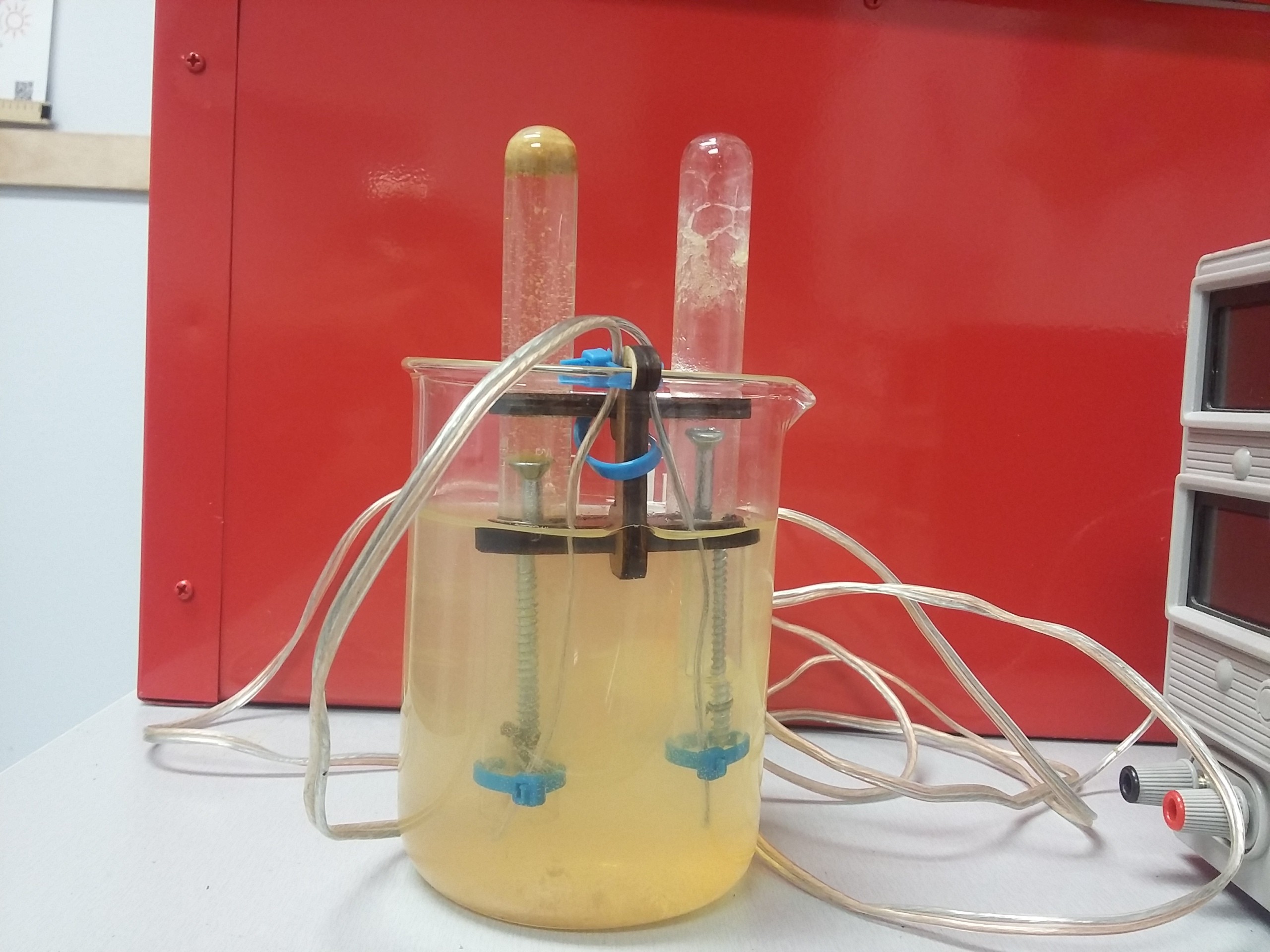 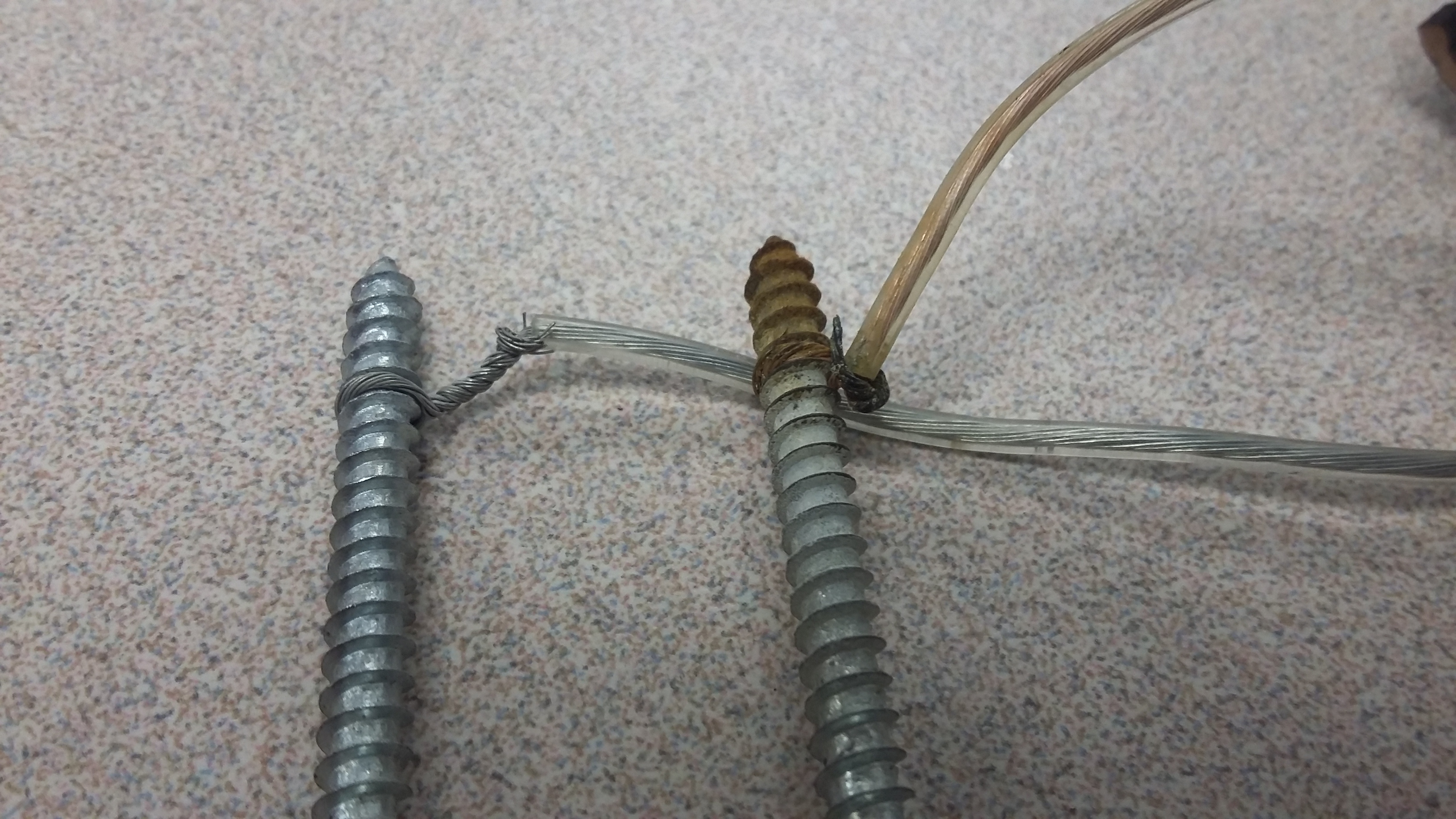 Here is the assembly fresh from the asphalt laboratory. The close up shows the cathode (left) and anode (right) after several hours of electrolysis.

Decanting the H₂ into a storage container for later use was also recorded.

The test tube needed to be inverted to release the H₂ gas, but the water bath was too narrow. To resolve this, I plugged the end of the tube with my thumb, pressed firmly and inverted in atmosphere. That was not the most rigorous method for maintaining H₂ concentration, but it was also not the weakest link in my gas production method. 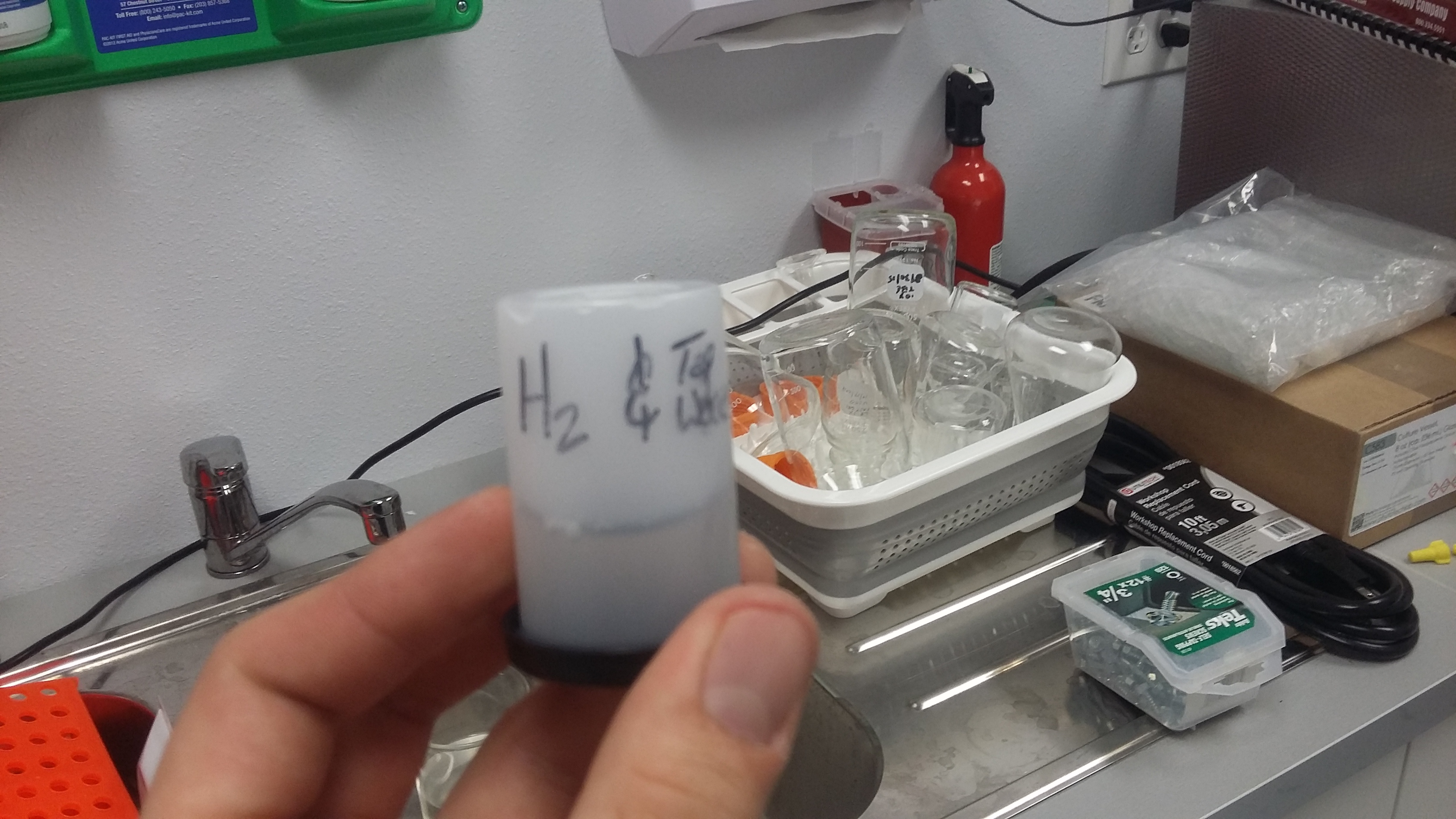 All told I managed to produce a few milliliters of H₂ gas. It’s being kept in a film canister in the BioChem lab for now. I’m not sure what to do with it. I may release it under some soapy water and try to ignite the bubbles, at the ends it seems like I already know some thing about chemistry, no doubt I will be learning much more at James Cook University Bachelor of Science.

Afterhours note: I’m now somewhat convinced my lack of O₂ gas is related to the heavy amounts of Iron Oxide in the water. Could it be that I was supplying pure oxygen immediately to an iron surface? This could create a rust factory instead of creating a surface for O₂ bubbles to form and release from. More chemistry analysis is needed to figure out where all the atoms and elements went.

The real impetus for this experiment was the idea of producing a long term electrolysis station at the lab, to process liters of water over the course of weeks. Being able to allow a system like this to run unassisted would be nice for slowly distilling D₂O, or heavy water. I’m also not sure what I’d do with that. However, I watched Cody of Cody’sLab do it and now I want some heavy water of my own. If you haven’t seen his videos I’d highly recommend them. He does a very good job of sciencing on a budget and explaining how he does so. 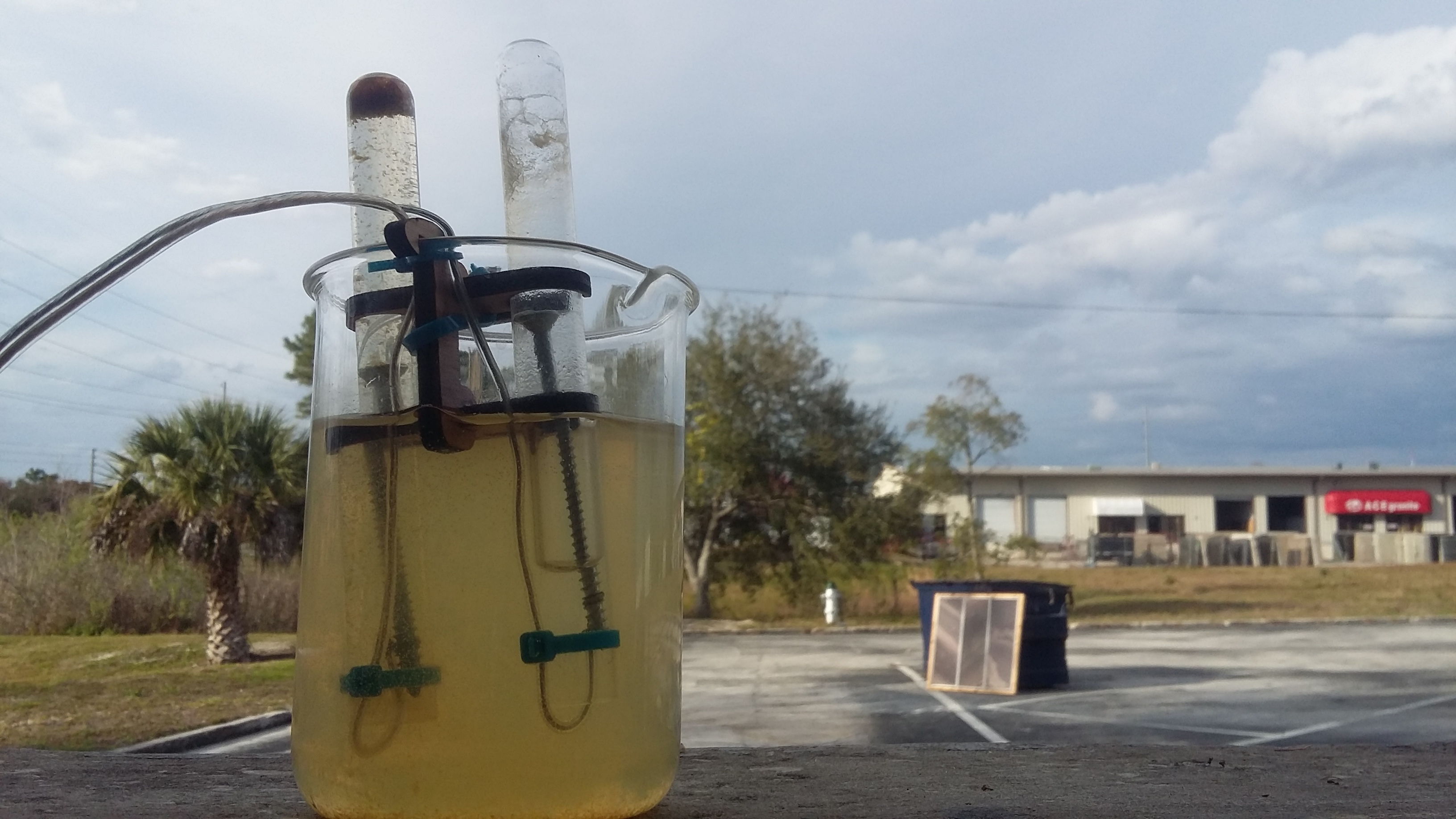 The apparatus and the testing grounds. You can clearly see the iron oxide solids swirling in the left tube above the anode, and the meniscus formed by the positive pressure of the H₂ in the right. It has pushed the water level down by a few centimeters. I was impressed with this result, considering both tubes has no gas in them a few hours ago. I have heard many times about this experiment, and am pleased to have finally carried it out myself. 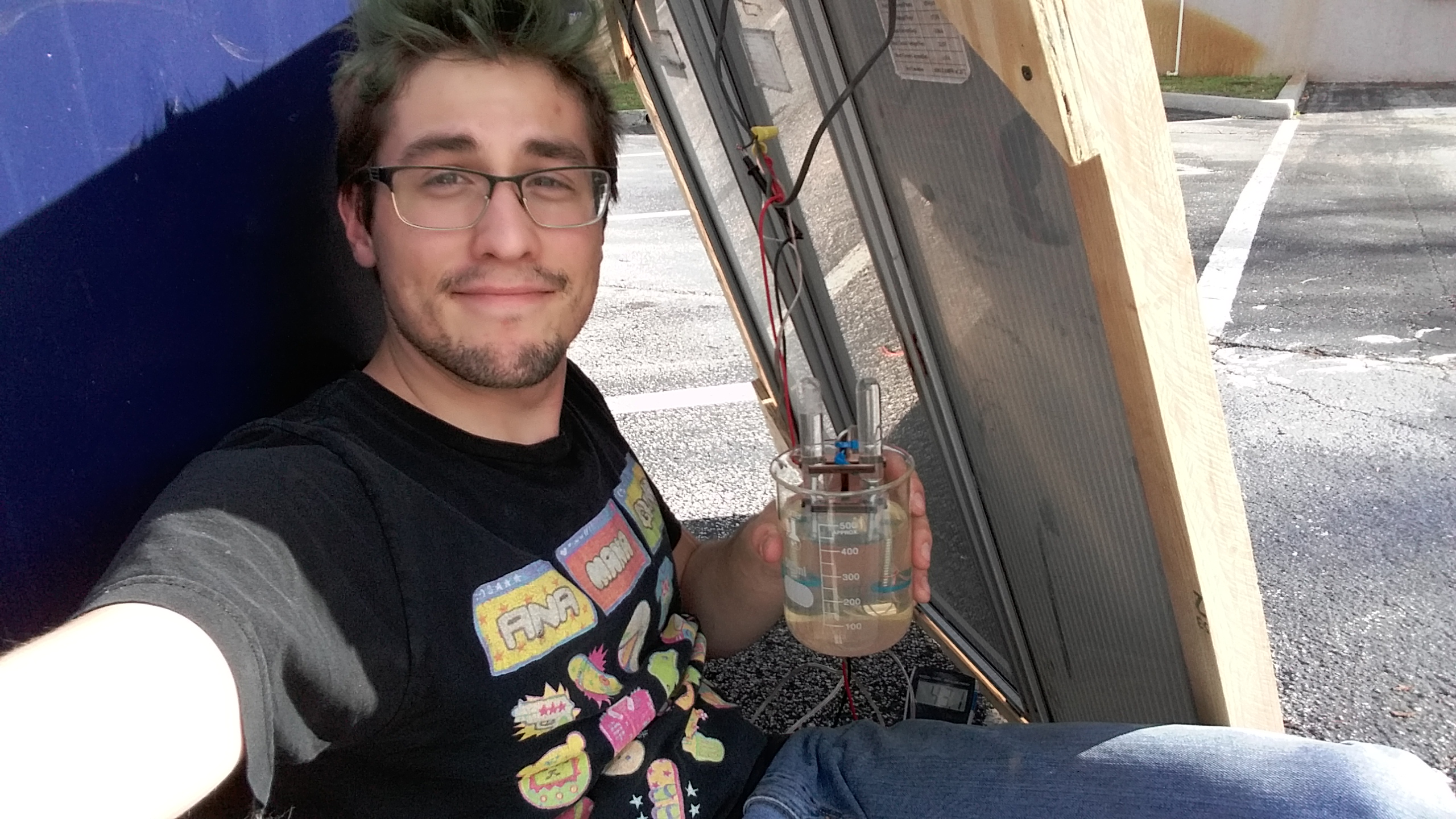 Happy science man enjoying a very lazy, yet productive, Monday afternoon in the shade of his solar panels. Did I mention the all-day sweet jams?