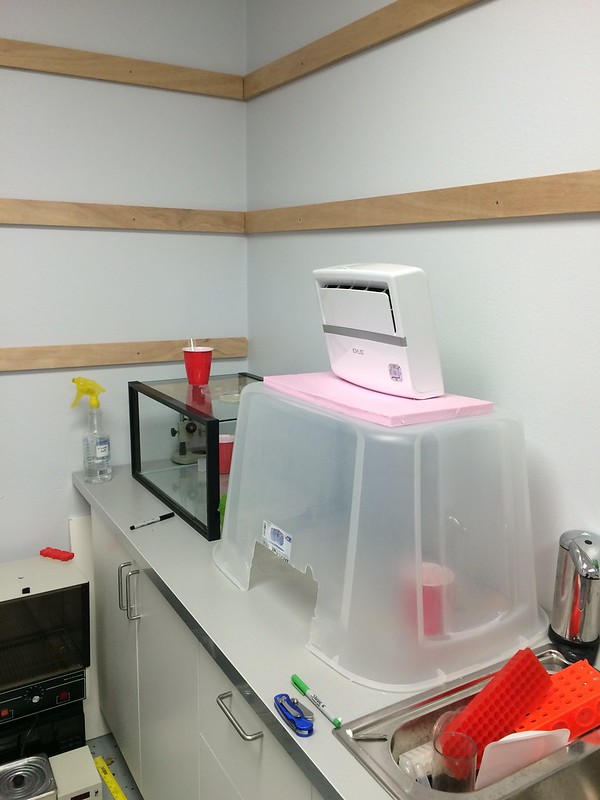 On most Saturday afternoons, we have a meetup at FamiLAB to work on equipping the DIY-BioTech lab, practice techniques for the classes we are putting together, and plan future projects.  (We try to keep the calendar and meetup entries up-to-date, but if you don’t know for sure that we are meeting on a particular weekend, it wouldn’t hurt to check the #diybio channel on slack to make sure we will be around before heading over.)

We are currently interested in some techniques that would benefit from being done in a relatively clean environment, and decided to investigate a few options before investing too heavily in any particular strategy.  The options we started with were: 1) Working on a clean countertop, 2) Working inside a “still air” box, 3) Working inside a container positively pressurized via a good HEPA air purifier for pet dander and allergies.  (We will only be working with Biosafety Level 1 organisms, so negative pressure is not a requirement.)

For the “still air” box, we used a glass aquarium turned on its side, and wiped the inside down thoroughly with 70% isopropyl alcohol.  We used a clean, wiped down red plastic cup to hold the plant tissue culture media tube upright. 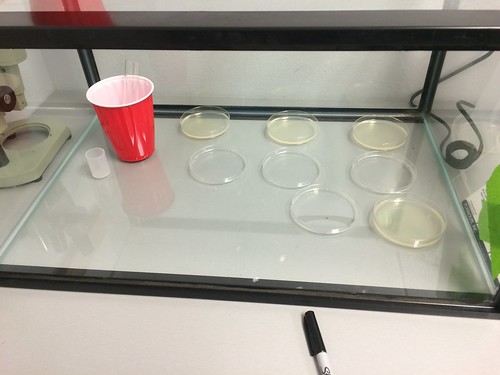 For the “clean counter” environment, we cleaned the top surface of the aquarium with 70% isopropyl alcohol, and set our plates and plant media tube on top. 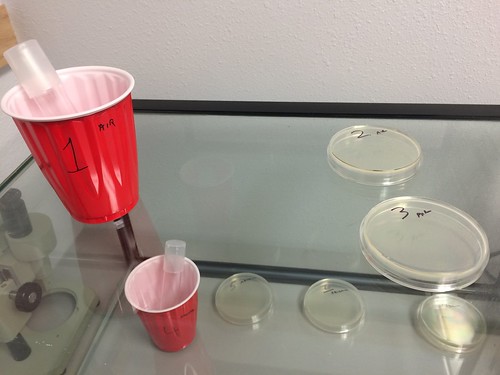 For the “HEPA filtered air” box, we used a large clear plastic storage bin, and a small desktop “air purifier” that we purchased at Lowe’s.  We carefully measured the exhaust port on the air purifier using the measurements off of this in this in-depth review and laid out where we wanted to cut an opening in the bottom of the clear plastic bin.  We quickly discovered that the clear plastic bin was much easier to shatter than it was to cut: 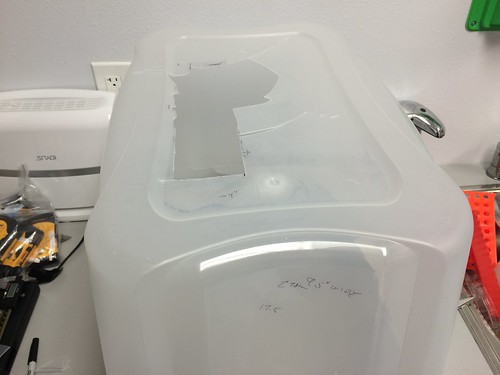 But we had some spare pink foam insulation handy, and made an adapter: 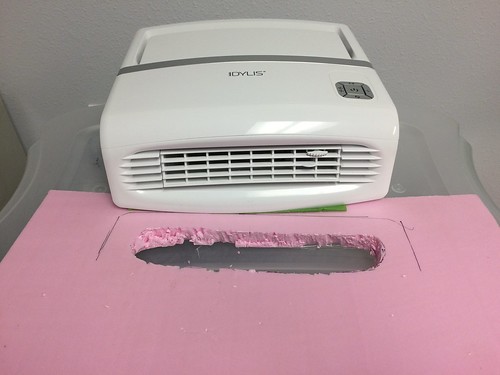 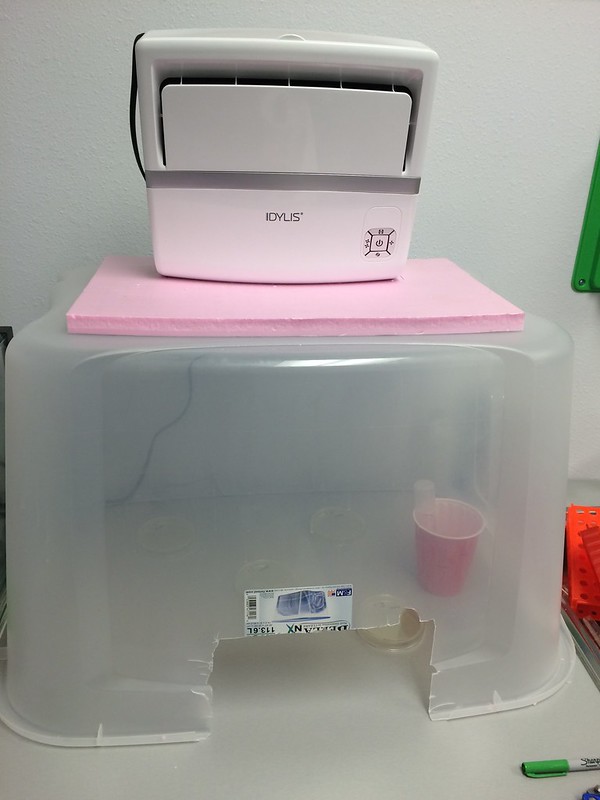 We had the fan in the air purifier running on low, and did NOT use the ionizer/ozone generator option. 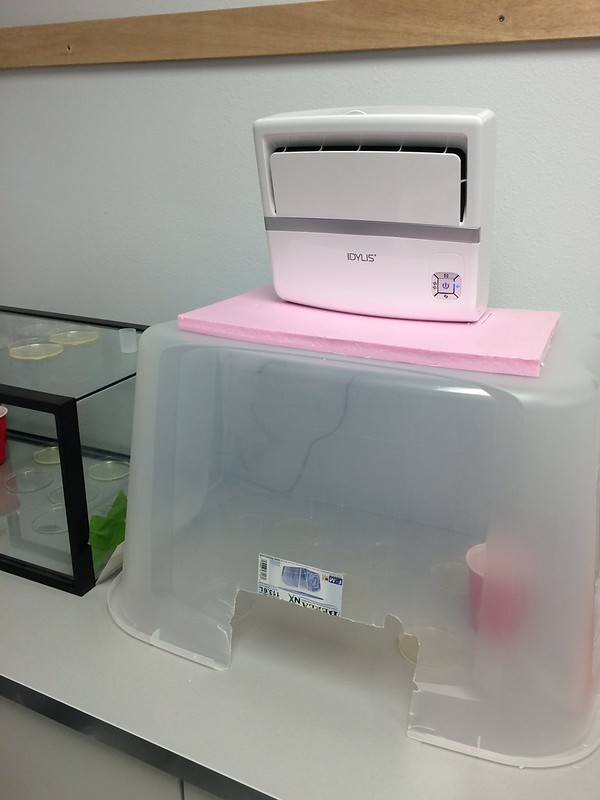 We washed our hands, and went out in the kitchen to take a break, and evaluate the efficacy of a recent Kickstarter’s attempt to approximate the reportedly amazing flavor of Kopi Luwak without the whole ick factor of mistreating civits and their digestive tracts.  We set up an aeropress and busted out the reward sample of cultured coffee: 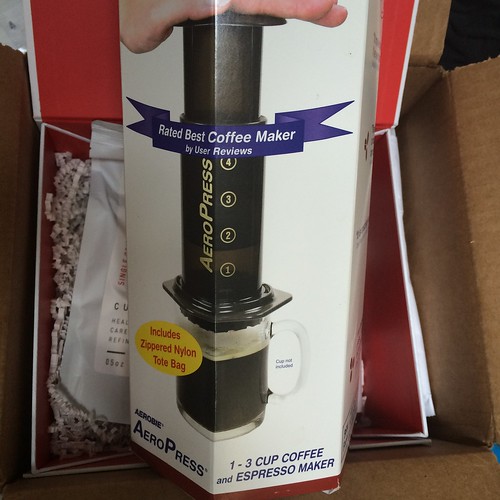 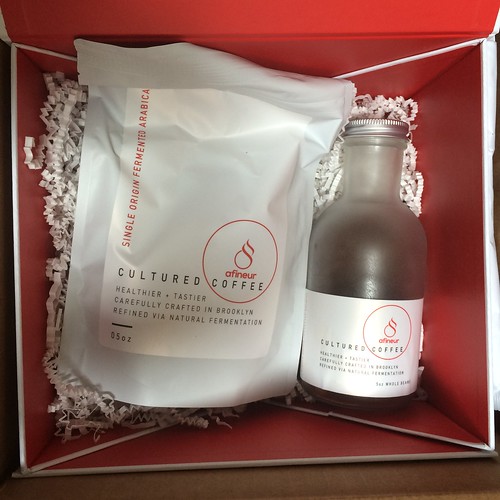 “Afineur has developed a platform enabling the use of tailored fermentations as a precision tool to naturally enhance the chemistry of food. It opens a new realm of possibilities to naturally craft healthier, tastier, and more sustainable food.

We assemble novel cooperative microbial systems to achieve very specific goals: crafting better food. Each microorganism is selected for its ability to naturally tailor a subset of molecules in the target food product and for it’s ability to cooperate with the other microbes.”

As a control, we made comparable batches of some “Coder’s Blend” that our members picked up at a recent JavaScript conference: 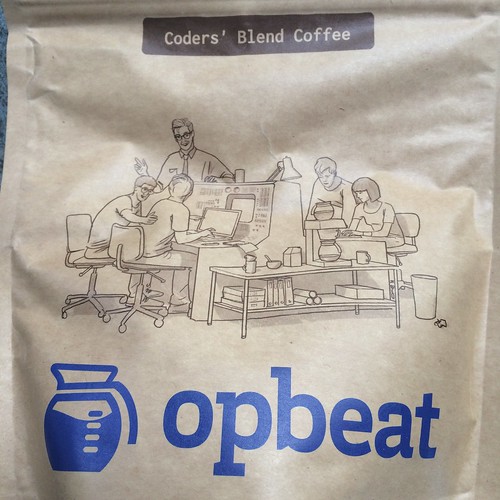 One of our members was working on automating a dehydrator, and gave us some samples of Uncle Bo’s Jerky with which to cleanse our palates.  Verdict: There was definitely a distinct difference between the two types of coffee, and Uncle Bo’s Jerky is really, really good.

We then took a dinner break, came back, put the plates in the incubator, let them incubate for 2 days and these were the results:

Typical experiments would limit exposure to a few seconds, and would minimize exposure to contaminates settling downwards, so even the “clean counter” plates would not normally see that level of contamination, and probably be okay for most purposes.  The “still air” box seemed to offer some reduction in contamination, but not as much as we had expected, and the “positive pressure HEPA” box performed much better than we anticipated.  Based on this, we will proceed to work on a nicer iteration of the HEPA box, and test again.

Also, coffee is good, and Uncle Bo is welcome to stop by with samples anytime he wants.