Okay, so “The Gang” is a misnomer here, just feeling the Sunny in Philadelphia vibe. It’s been sunny in Orlando all afternoon, where I’ve been sweating against a dumpster for three hours. And an awesome three hours they’ve been. My only goals today were to split molecules and listen to sweet jams and those were thoroughly accomplished. Disclaimer: My highest education in chemistry is a GenChem course in which I am currently enrolled. I am by no means an expert, nor have I read much about what I’m doing. This is an afternoon project in exploration […] 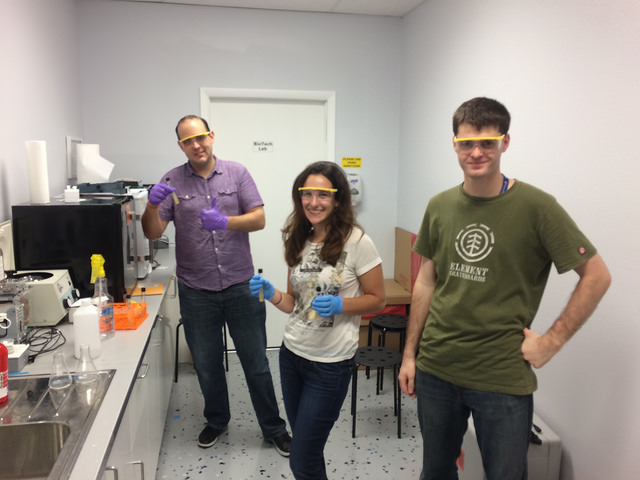 On most Saturday afternoons, we have a meetup at FamiLAB to work on equipping the DIY-BioTech lab, practice techniques for the classes we are putting together, and plan future projects.  (We try to keep the calendar and meetup entries up-to-date, but if you don’t know for sure that we are meeting on a particular weekend, it wouldn’t hurt to check the #diybio channel on slack to make sure we will be around before heading over.) We are currently interested in some techniques that would benefit from being done in a relatively […]

I got two of Amazon’s newly-available dash buttons with the intention of playing with them to see what they were capable of. They’re a $5 button that when pressed, wakes up, connects to your Wi-Fi, and then turns off. I got the Olay buttons since it’s easy to Sharpie out the logo. Amazon seems to only let you buy two buttons per brand right now, so if you want more black buttons, try Gatorade or look through the selection. The Button Itself: The CPU is a STM32F205RG6 processor which is an […]