Most of the things I make are for gifts, especially when I’m too crunched on time to do many projects. One of the gifts I made this year was a BB8 pisanka (plural pisanki), a Polish Easter egg. (Yes, this was several months too early for Easter, but I figured it might be cute enough that no one would notice.)

I was taught that pisanki are a Polish tradition* imbued with symbolism, with dozens of markings meaning dozens of things; a fair amount of thought and reflection goes into the design and making of them. Mine is a little… unusual… and non-traditional in that it’s more of a novelty design, but it’s got meaning nonetheless – pisanki are given as gifts to symbolize and represent friendship.

*(Actually, they’re pretty ubuiquitous among the Slavic ethnic groups – Ukrainians, Polish, Czechs, Slovaks, etc.; we just all call them different things. They’re not even limited to the Slavs, as other Eastern European cultures make them, too. I know them as Polish.)

With a name taken from the Polish verb “to write” (modern Polish) and “to paint” (old Polish), the making of a pisanka the way I know how (there are several kinds; I make “pacenka” style pisanki) uses a technique that is like both writing and painting; first using a pencil, then using a tool called a kistka, a stylus with a pointed metal cup on the end, you sketch and wax-cover designs over and over, dying the egg in between iterations, eventually resulting in a nearly completely covered egg. With a little help from a candle, your design emerges from the wax and you’re done!

I made mine from a chicken egg, which many people do, though larger and more intricate designs can be made on goose or duck eggs. The first step is to make a pinhole on each end and blow out the egg; otherwise, the egg will eventually go rotten and explode. (Save the egg and eat it later!) There’s a tool for this, to save you giving yourself a headache, but I didn’t have one with me, so I did it just with my own lungs (that took a while). 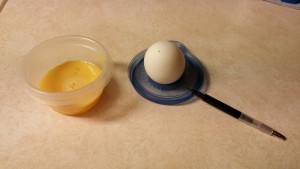 Once the egg is empty, you can sketch your design in pencil (you blow it out first so that you don’t smudge your pencil designs all over the egg). I’d studied the BB8 markings and sketched them out on paper, but realised pretty quickly that the designs were too small and intricate for both the tools I had on hand and my own skill, so I left out almost all of the fine detail. 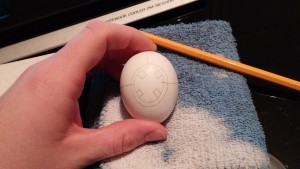 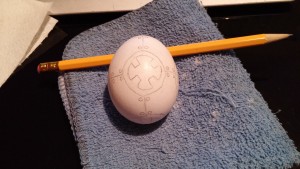 I proceded to cover over the parts of the egg I wanted to remain white. To do this, you hold the kistka over a candle flame until it heats up, then scrape it against beeswax to fill the cup. After holding the kistka over the flame again to melt the wax fully (but not make the kistka catch fire!), you can draw on the egg with the implement. Depending on the type and size of kistka you have, you can make very small or very large lines to fill the space. This was one of the most time-consuming parts, as BB8 has a high percentage of whitespace and I only had medium kistkas. 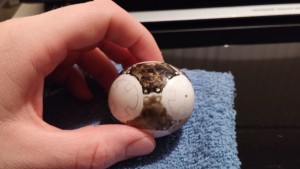 Next up – dyes! I have a bunch of packets of powder dyes, but you can even use normal Easter egg dyes if you wanted (though the colours won’t be as vibrant). This application was pretty simple and limited in scope with respect to dyes, so it doesn’t demonstrate the colour layering well. With more multicoloured pisanki, you layer the colours lightest to darkest as you colour the whole egg. In this case there were just two dyings – orange and black. 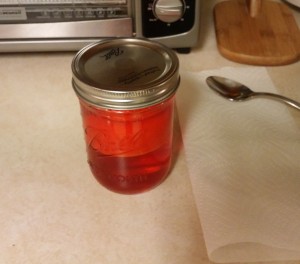 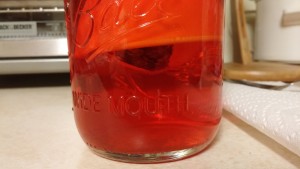 Now that I’d dyed all the non-covered parts orange, I could cover with wax only those spots I wanted to remain orange, leaving all the stuff that has to be black uncovered. 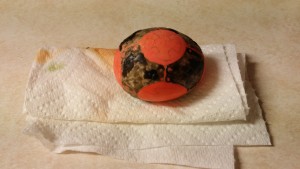 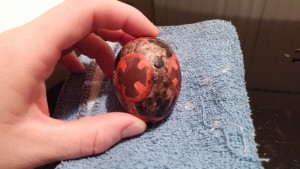 My pisanki set, inherited from my mother, hadn’t been opened in several years and so I had to scrape corrosion off of the kistkas. The kistkas, dyes, and even the beeswax and candle holder had all last been used several years ago when my mother last made pisanki.

I didn’t do test runs with them first, so you can see spots where there were blockages that eventually broke through, resulting in an uneven application of the wax. I’m a little embarrassed by the look, but it turned out well anyway! 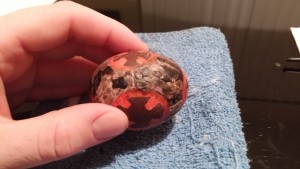 I didn’t take any pictures of the egg in the black dye, but that was next, once all of the permanently-orange spots were covered with wax.

The final part, once I had dyed the egg as dark as I thought I needed to (pro-tip: it wasn’t long enough; the egg actually started showing some of the black parts as green or purple later on), was to remove the wax. I’m sure there is a quicker way to do this, but the way I learned is bit by bit, holding the egg up to the candle and wiping the melted wax away. 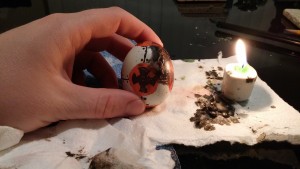 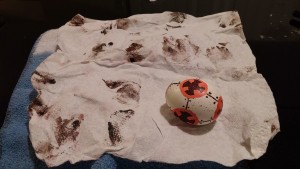 You can really see in this picture where the wax didn’t cover perfectly evenly. Next time, I’ll clean and check out my tools better before I start! 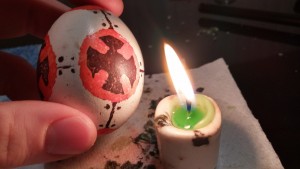 If there’s interest, I’m hoping to teach a class on this closer to Easter. If I do – I hope to see you there! 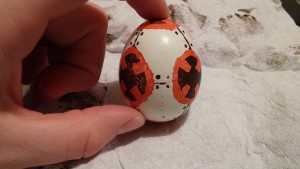 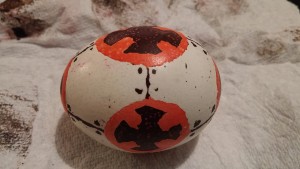