FamiLAB Rings in the New Year

FamiLAB members are really cranking in the first 24 hours of the New Year.

We started with Nick CNCing up a FamiLAB classic design, the flat pack Octocat designed by myself for laser cutting in 2011. (The files are available for download at http://www.thingiverse.com/thing:6076)

Heavy sanding was needed for a tight fit, special thanks to Lindsay and Katie, but this can successfully be called the first build of 2016 in FamiLAB. 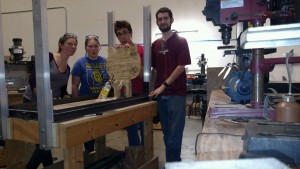 After getting Octocat standing (and getting it some champagne) I worked on finishing up some stained glass themed for the holiday. It’s a striped bottle rocket firework thing! A long brass channel and a twisted wire make for a good looking launch stick and fuse. 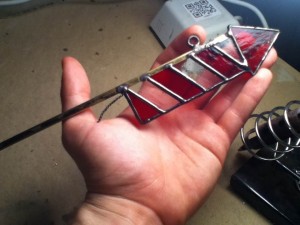 Realizing that it was approaching 3 in the morning, and that none of us brought any actual fireworks (barring the cute but inflammable glass one), we turned to a generous pile of capacitors. While they were rated for 10 volts, we hooked them directly into the mains wiring, with a few safety precautions. The result was, when applying power to the circuit used for the firing line, sparks shot yards into the air and a satisfying buzz was heard throughout the light show. Coupling that with some stock smoke bombs leftover from an Orlando Mini Maker Faire project circa 2012, we had a pretty satisfying New Year’s Celebration.

Returning indoors to clean up after the explosive experimentations we noticed that the paper towel holder had become broken. Nick wouldn’t have this and led us out to the warehouse and into the welding area. A few minutes later and he had built for the lab a new bracket to hold our paper towels to the vending machine. 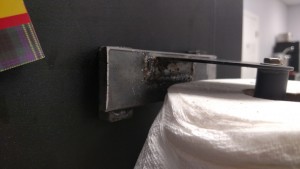 Rick followed the morning after with some impressive work on getting his vacuum forming machine operational. Here’s a photo of his heating elements warming him up in the chilly 80F Florida winter. 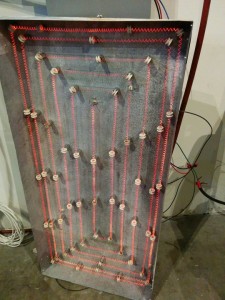 Shea worked on producing more shippable units for his Kickstarter backers with the laser cutter.

The evening was filled with much yarnage as Barbie led a small knitting workshop for Carlos, Lindsay and myself. She got Lindsay started on some much anticipated cotton washrags. 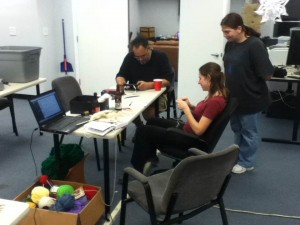 Lindsay broke away from the yarn meetup to finish up some fungal stained glass on her own, and finished it just in time. 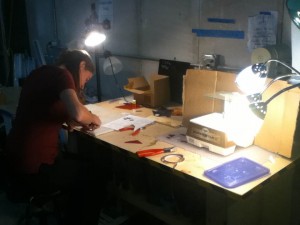 And here is a picture of the last build of the first day of 2016: 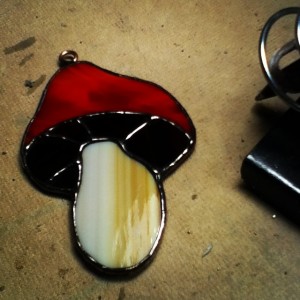