Off-Grid Omelettes (Or, Solar Stove on the Cheap)

As we are always fans of omelette bars at ribbon cuttings, eggs needed to be cooked for newlab.

As a projection tv was about to be thrown out, Lindsay and I looked online for open plans to build a deathray. Projection TVs have built into each screen a fresnel lens. This allows you to collect around a square meter of the Sun’s energy and focus it on a single point, like any smaller, safer magnifying glass can. We found Grant Thompson’s videos on YouTube documenting his fresnel frame build and used his plans for ours (linked at bottom of post). 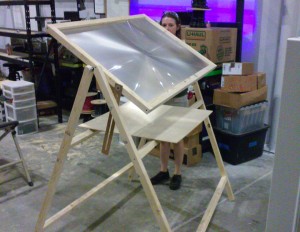 After finishing the $15 build late on Saturday night, we regrouped Sunday morning for some solar brunch. 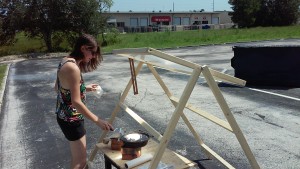 After a few minutes of radiation, the cast iron was hot enough to melt butter. Not pictured: setting fire to a pancake while testing focal points.

The first egg didn’t cook very quickly, but it did cook. 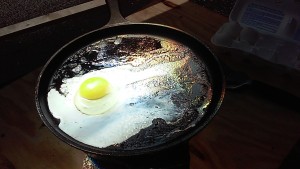 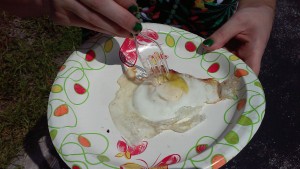 For the second round of eggs, we went with a scramble featuring some bell pepper. 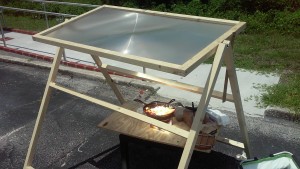 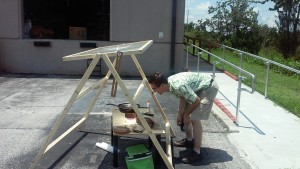 The scrambled eggs were much more successful. This could be due to a hotter pan, after leaving the rig unattended for an unsafe amount of time, or thanks to scrambled eggs being the hardest thing to ruin when cooking. The deliciousness of the scrambled eggs can be independently verified by Suraj, who also enjoyed our testing toasting pancakes.

I also attempted to save my unprotected eyes by building an indirect observation box. A small hole was poked in one side of a box unused by the recent move, and a head was inserted in the bottom. The goal of this was to project an image onto the back side of the darkened box and observe the status of cooking without looking directly at the very bright pan. It turns out looking at a fuzzy image of a stove top behind you is not an efficient way to cook, so this idea was scrapped quickly. 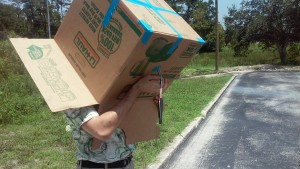 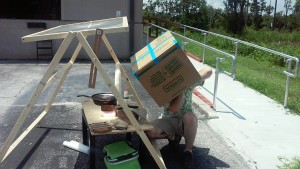 Here are some resources we used in planning and researching our build:

PS: Stephen is pillaging the remainder of the TV for flyback transformers, the red, green and blue CRTs, a few speakers, and some other odds and ends for future projects. We’re looking forward to seeing what he builds with those!