On Saturday, September 20th, FamiLAB members Jamie Szafran and David Sikes went to the Intertel Southeast Region’s Annual General Assembly (held this year in Orlando) to give a talk about hackerspaces.  The talk covered hackerspaces in general (definitions, characteristics, examples, history, etc.), Maker culture/the Maker movement, FamiLAB history (“the genesis of a hackerspace”), and Maker education. The talk, planned for an hour, lasted an hour and a half and spawned continued conversation with Intertel members for a further hour and a half. 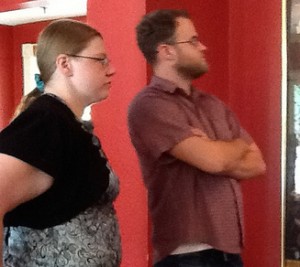 Jamie and David watch the previous speaker while they wait to speak. – Image Credit: 2014 Mac Rutan

FamiLAB thanks the Southeast Region of Intertel for the invitation and hopes to see some of its members at the lab soon!

Founded in 1966, Intertel is a high-IQ society that has only one qualification for membership: a score at or above the 99th percentile on a standardized IQ test.

The society has three purposes: