This year in the Makers Village at Minecon 2013, FamiLAB members spent a busy 2 days showing people of all ages how to use the Application Programming Interface (API) for Minecraft Pi Edition. Three Raspberry Pi stations were set up to demonstrate software and hardware hacks.

Raspberry Pi Station 1:
We used station 1 to show attendees how to set up Minecraft Pi Edition on the Raspberry Pi and to run various python scripts from the global Raspberry Pi community. A very special thanks goes out to MCPIPY for compiling and hosting the examples. If you’d like to try any of this yourself, you can find all of the resources below. My favorite scripts for getting kids engaged with the API are the maze (from MCPIPY and davef21370 from the Raspberry Pi forums) and the clock examples (from contributors Martin O’Hanlon and SleepyOz). The maze script clears an area starting at the player’s position before building a large maze structure. One of the digital clock script examples clears a similar grid of blocks before filling the ground with a set of blocks that continuously updates the time from the system clock.
At one point Sunday afternoon while showing the scripts, I inadvertently built the digital clock into the floor of the maze when I ran them one after the other without moving my character. It looked cool and performed really well, although we had to dig through some of the maze walls to show the seconds digits. Yes, we could have written a script to clear the walls, but sometimes you need to take a break from working so hard and just dig… The analog clock by Martin O’Hanlon is an impressive example as it shows how quickly the blocks can be updated. The script builds a giant circle in the sky and then renders the hour, minute, and second hands based on the current clock settings from the RP. Each visitor was very impressed with the second hand updating over a dozen blocks every second. This is the sort of example that gets people excited about the process and results of coding.

Attendees were encouraged to modify the code and run it. There were some software hangs mostly due to text being entered into the python script inadvertently by new users. Overall, the Minecon attendees were interested, engaged, and very creative!

The python examples for station 1 can be found here at MCPIPY:
https://github.com/brooksc/mcpipy/

Raspberry Pi Station 2:
At our second station, we set up the incredible Step Detecting NeoPixel Pumpkin Pi. Well, that’s one name we’ve had for it.
FamiLAB members Theodore Wahrburg and IanStarGem put together a python script to detect the type and id of the block that a player is over. That script in turn sent data to an Arduino Uno that controlled the Adafruit RGB NeoPixels. The RGB lights were placed inside a handmade Minecraft-style jack-o-lantern created by John Cope. Special thanks to GadgetCat for donating the NeoPixels for Minecon 2013! Visitors to the Raspberry Pi stations in the Makers Village:

We’d like to extend a special thanks to Brooks and Phillip from MCPIPY for compiling and sharing a great collection of scripts that we used at RP station 1. They checked in on us in the village and gave us the thumbs up! 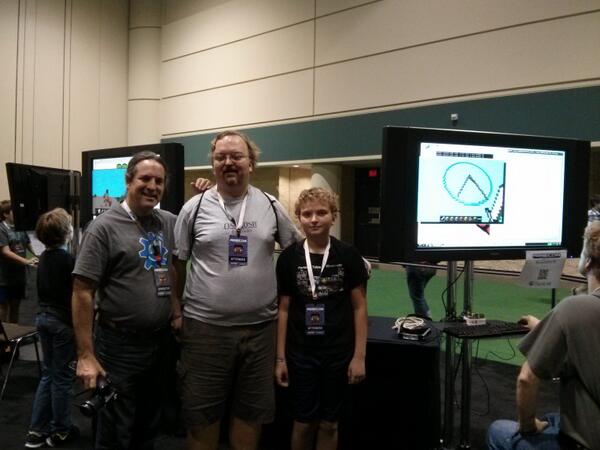 More than a few Mojangstas, including Aron Nieminen of the Minecraft Pocket Edition team, visited the village. We spoke briefly and Aron did mention the need to update the Pi Edition. I got a feeling from the look in his eye he was more than pleased to see kids and parents working in the API. Chase Nunes and Joseph Falbey from GeekGamer.TV interviewed us for the Minecraft ME show. The section on the Raspberry Pi is at 24:51, Bill Stilwell’s Minecraft Arcade Edition is at 28:16. Check out the comprehensive show coverage by Chase and Joseph here:

Minecon 2013 was a great experience from the exhibitor point of view in the Makers Village. The overall enthusiasm for the Minecraft Universe was constant and powerful. Having the opportunity to share the capabilities of the Raspberry Pi platform within that universe was invigorating and just plain fun!

Additional thanks goes to the Raspberry Pi Foundation for making the platform and nurturing the community, The Raspberry Pi and Minecraft communities, Broadcom for it’s vision and commitment, all of the distributors for keeping the Raspberry Pi on shelves, Mojang for sharing, and Curse for all of the great wiki and forum support on the Minecraft side of things!