Beware FamiLAB!!  There be monsters here!

This year I decided to do something special for Halloween and with a little inspiration from a trip to the Tampa Bay Mini Maker Faire, I decided to make a monster in a box.

So first off a simple box. Some rough cut lumber and a few nails later (yeah it’s never that easy).  This box was rather large as I had planned to have some other effects, but time ran short.  I’ll save the tentacle monster for next year 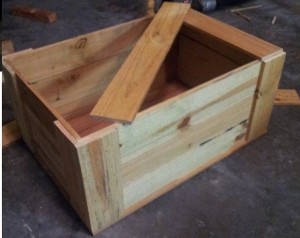 Next up was a way to lift the lid and bang it a bit randomly. The teeth are random in start time and height, with one exception.   The extra large turn is to give the eyes a chance to peek out. Of course there’s always were a few snags… over tightened the shaft coupler and cracked the PLA wheel mount.  Rebuilt in ABS and off we go. 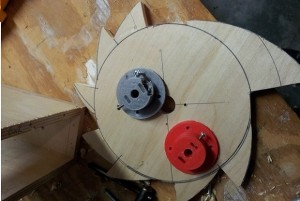 Here is a picture of the lid raising mechanism fully assembled.  This geared motor is running at 5 rpm

And another shot of the box, with the roller which rides along the ‘saw-blade’ wheel.  Turns out the small riser I had to bump the wheel sensor was off a bit, so in the good tradition of FamiLAB I patched it with some blue tape.

The lighted eyes were on loan so I couldn’t hack the wires. To get them to light up at the correct time I needed to switch the power on and off via the Arduino.  I took an extension cord and hacked it adding in a relay and some leads that go off to the Arduino. Between the relay and the Arduino I have an L293D to handle the extra voltage for the relay and protect the Arduino.

There were a lot of different effects that I wanted.  I ended up using almost every single available pin on the Arduino. 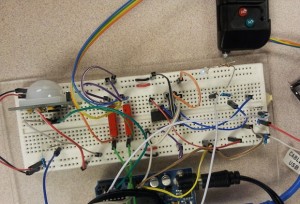 Stuff it all in the box, and then…. 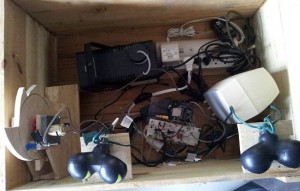 Got to watch the PIR sensors, they are crazy sensitive.  The neighbor walking his dog on the other side of the street set it off. Hilarity ensued.