If you are one of the millions who play Minecraft, then you know that MINECON, the annual Minecraft Convention is a very big deal. This year, 7500 MINECON tickets sold in less than a minute!

FamiLAB was approached by the MINECON organizers earlier this year, as the organizers wanted to add more interactive elements to the event. Since we are located in Orlando (the site of MINECON2013), and have lots of event experience producing Orlando Mini Maker Faire, they thought we’d be a great fit. We chatted with them, and provided a number of ideas that would help explore the intersection of a digital video game with the physical world. The organizers loved our ideas, and we set out to create a maker experience for 7500 people over two days!

We are very fortunate to have a great crew that works very well together for events – having just finished organizing and staffing Orlando Mini Maker Faire, we knew that our crew would be able to handle the challenge. We had a fantastic time, and the team from the Mojang and the event production company were amazingly easy to work with and very gracious before, during, and after the event. Even those in our crew that don’t play Minecraft told us they had a great time, even with all the hard work.

Here’s a brief recap of the exhibits in the MINECON2013 Makers Village:

We had six 3D printers at the event (2 DeltaMaker, 2 Ultimaker, 1 MakerBot Replicator, 1 MakerBot Replicator 2) constantly printing small Minecraft objects (creepers, pigs, endermen, etc.) which were then added to a diorama table with a Minecraft terrain. Huge thanks to Matt Armstrong, Laird Popkin, DeltaMaker, and the Printcraft team (Paul, Terry & sons) for spending the weekend printing and telling attendees about 3D printing, and to Roundtable Productions for making the awesome table! 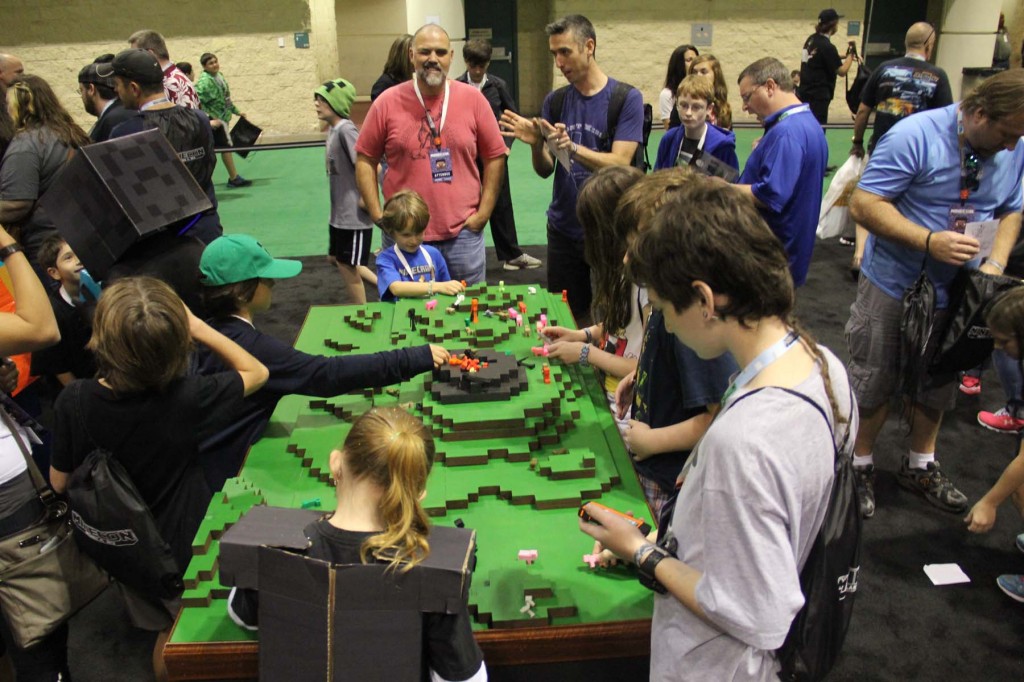 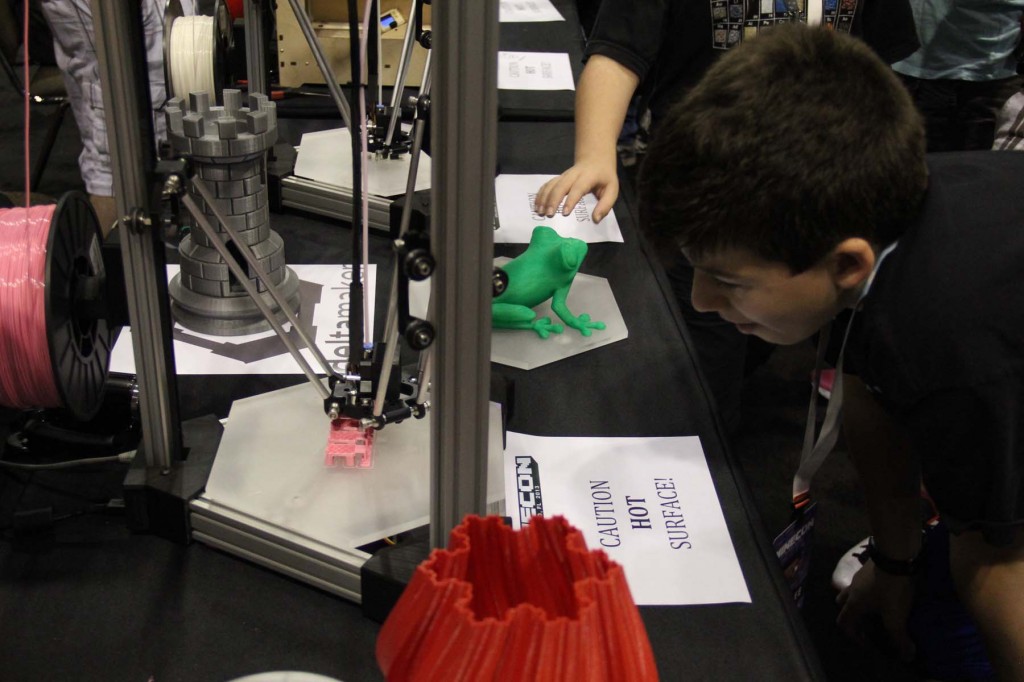 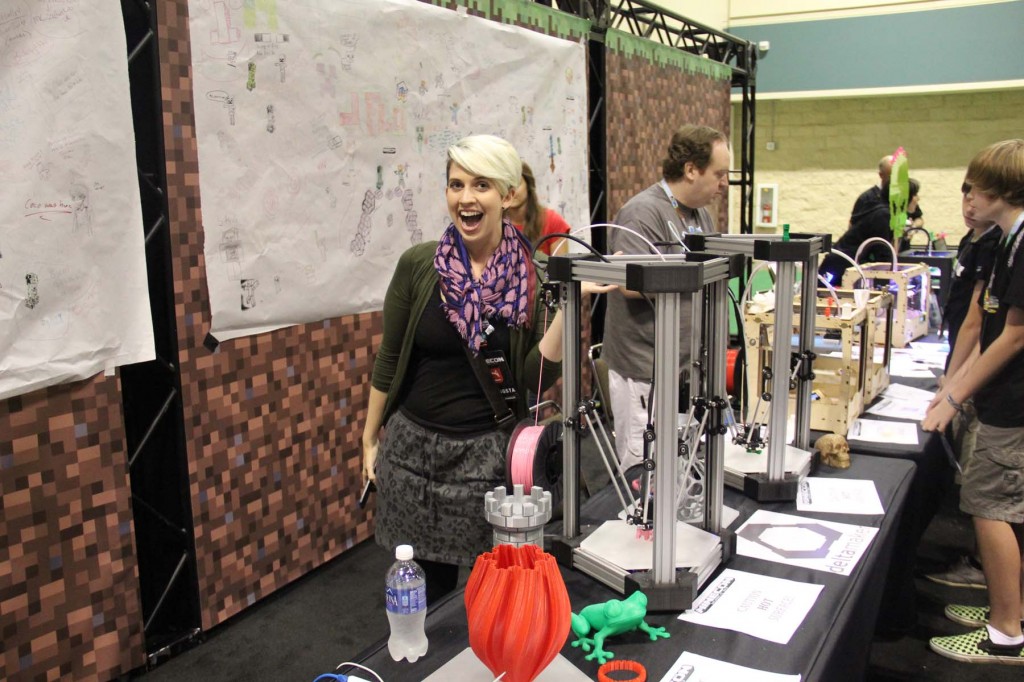 Lydia stops by to see the DeltaMaker printers (and lots of 3D printed Minecraft pigs!)

The team (family!) behind printcraft.org spent the weekend with us showing off their tools and services which create amazing 3D prints from directly from Minecraft worlds. You can play on their server, create something, then order it, or they have a plug-in for your own server which you then can print on your own 3D printer! 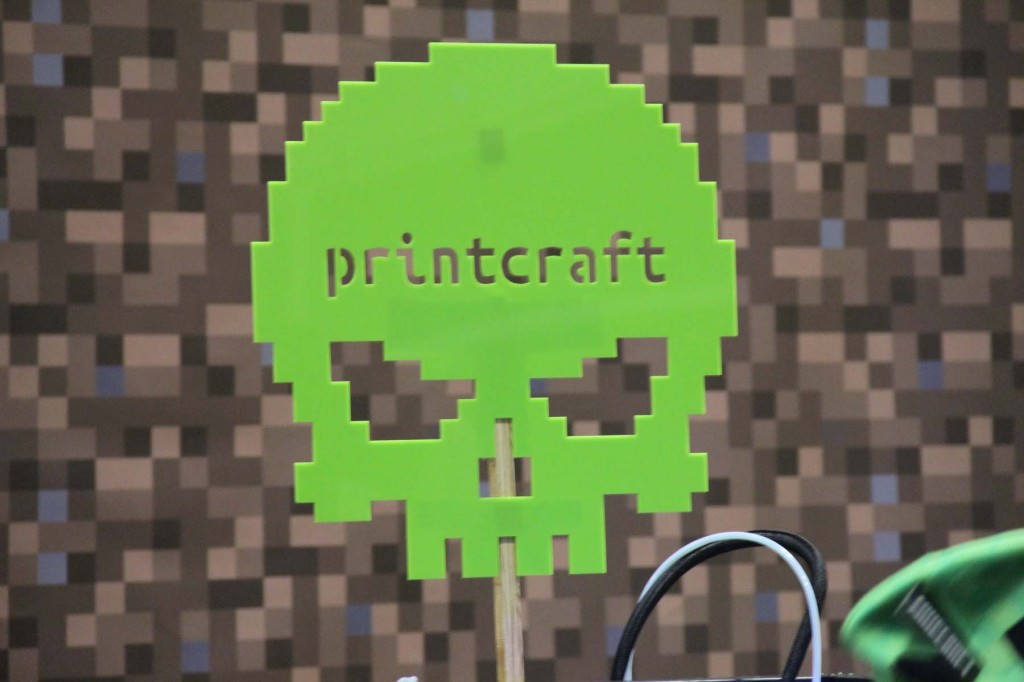 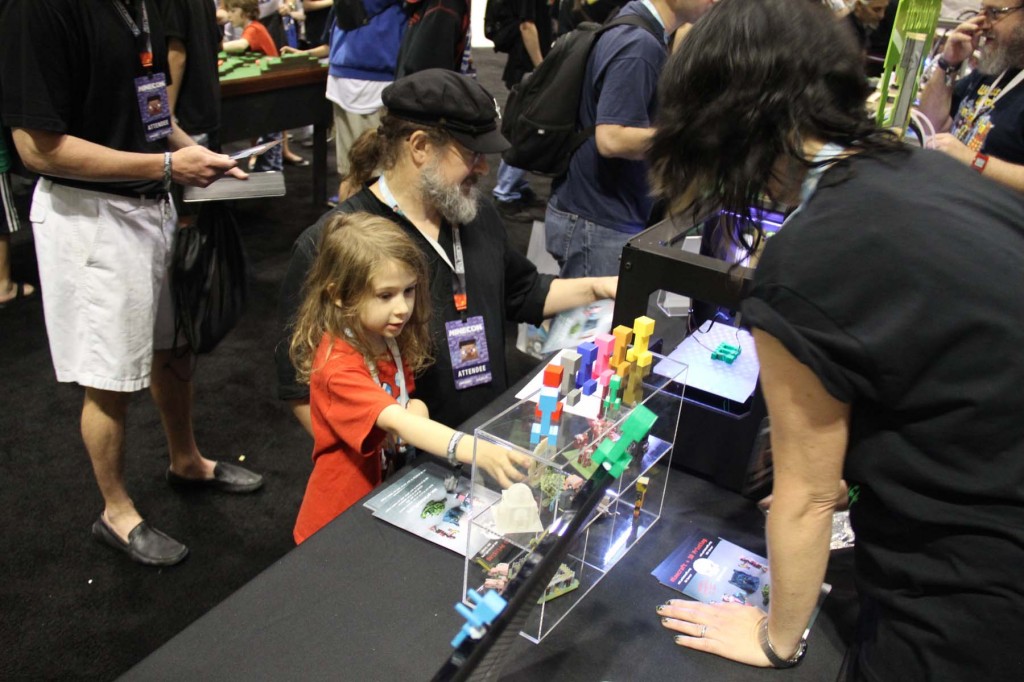 Pat Starace brought out his StarBots (they are still available on Kickstarter!) which are always a hit – and a little something extra. 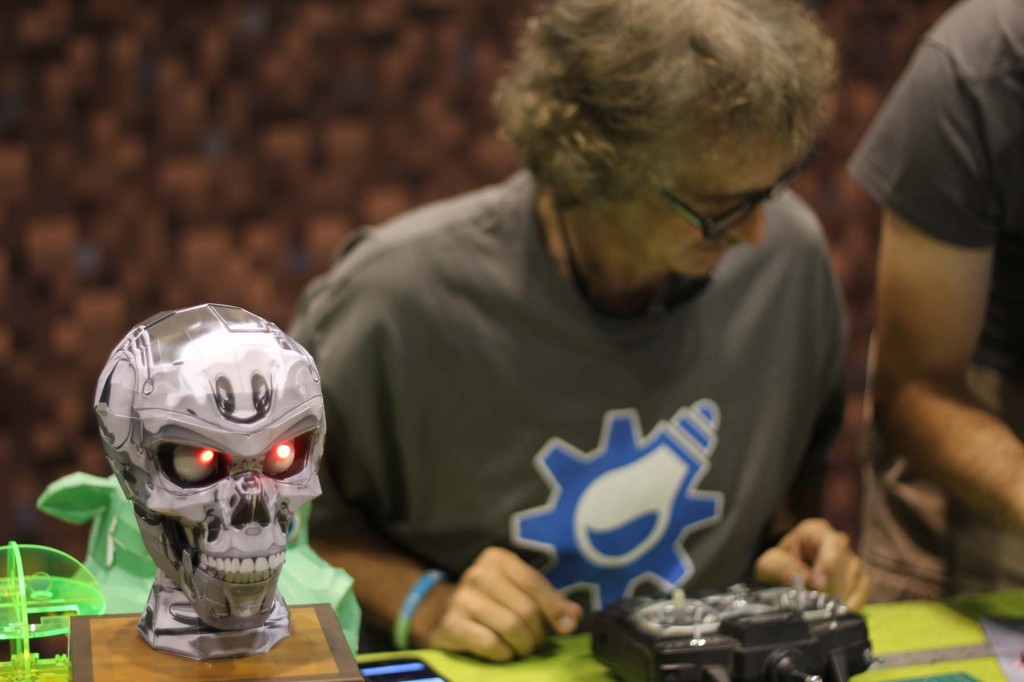 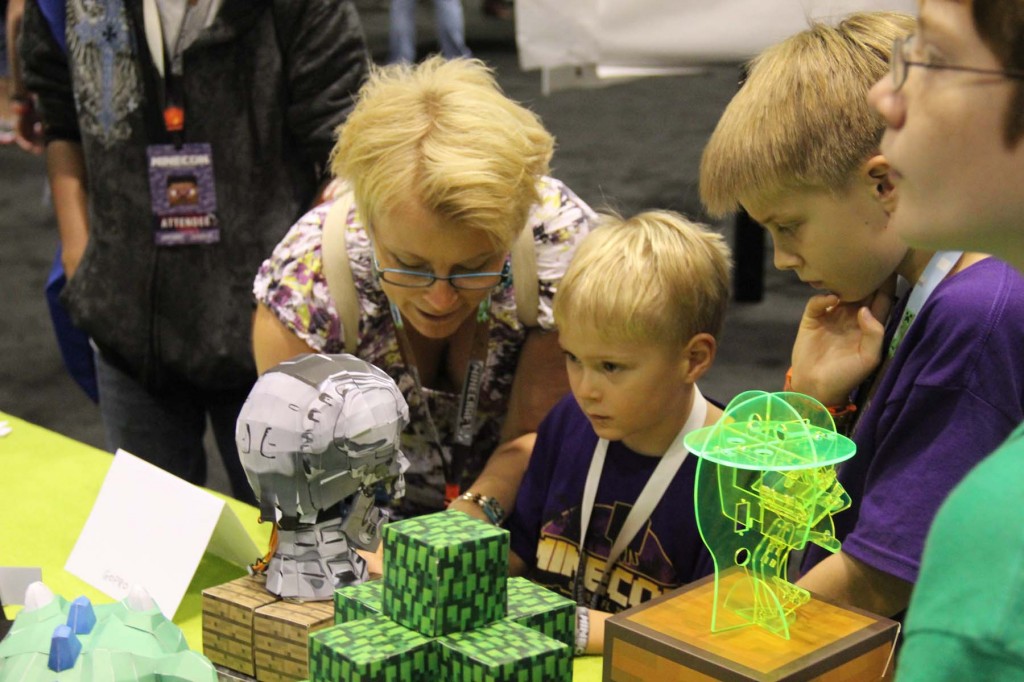 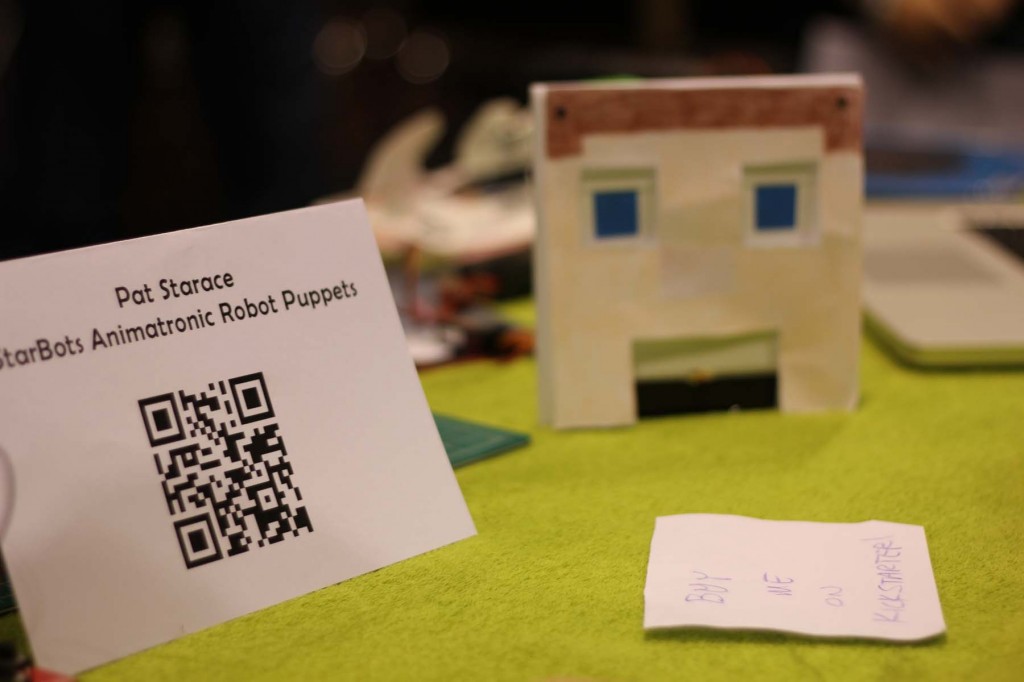 Pat created this special StarBot for the “block” Minecraft characters 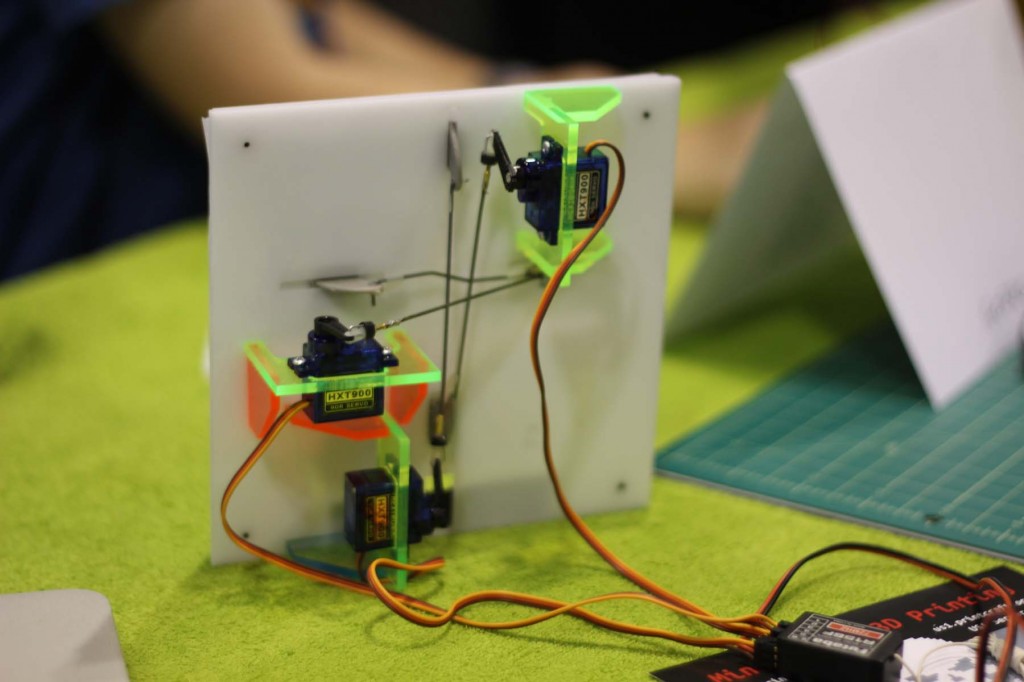 In the 24 hours before the event, Pat created a special StarBot face which is perfect for a Minecraft character – then, while at the event, he (with some help from the awesome John & Lindsey) created a body for it, and created a skin based on CaptainSparklez, one of the Minecraft YouTube celebrities at the event. Once it was singing, there was a constant crowd. Later, CaptainSparklez stopped by for photos and signed Pats newest StarBot  – here’s the video posted by CaptainSparklez and some photos of the fun.

A video interview of Pat showing off StarBots…

When we were planning the Maker Village area, I knew that we HAD to have  Minecraft Arcade Cabinet. Bill Stillwell and Mick Simmonds stepped up to the challenge, and build one amazing cabinet. It was played continuously all weekend (Minecraft version 1.7.2), and keeps showing up in exhibit hall walkthrough videos :) 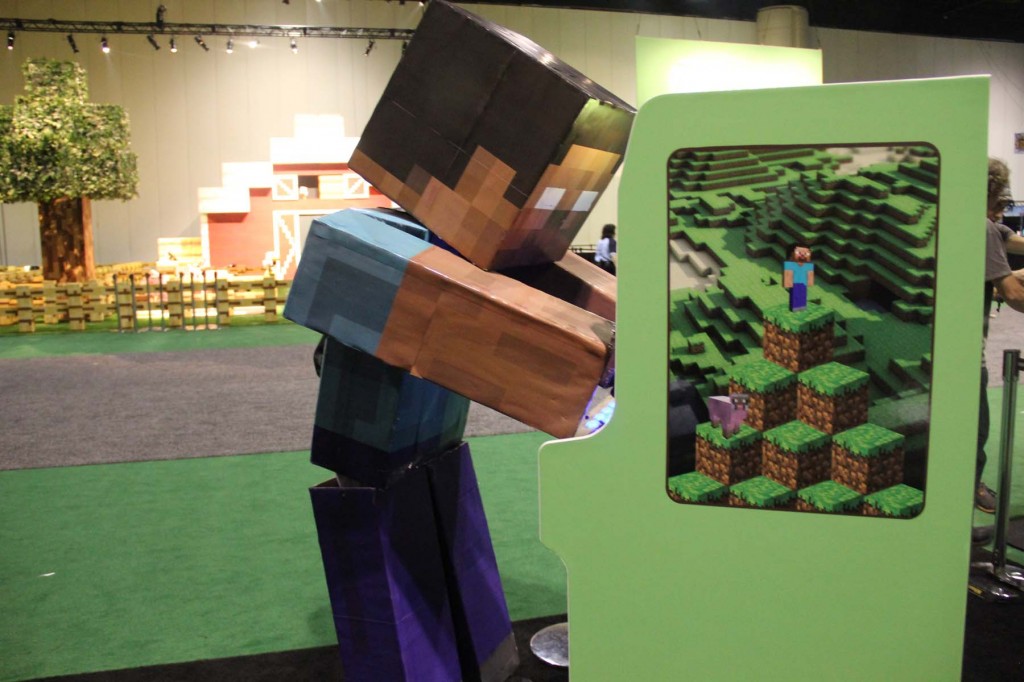 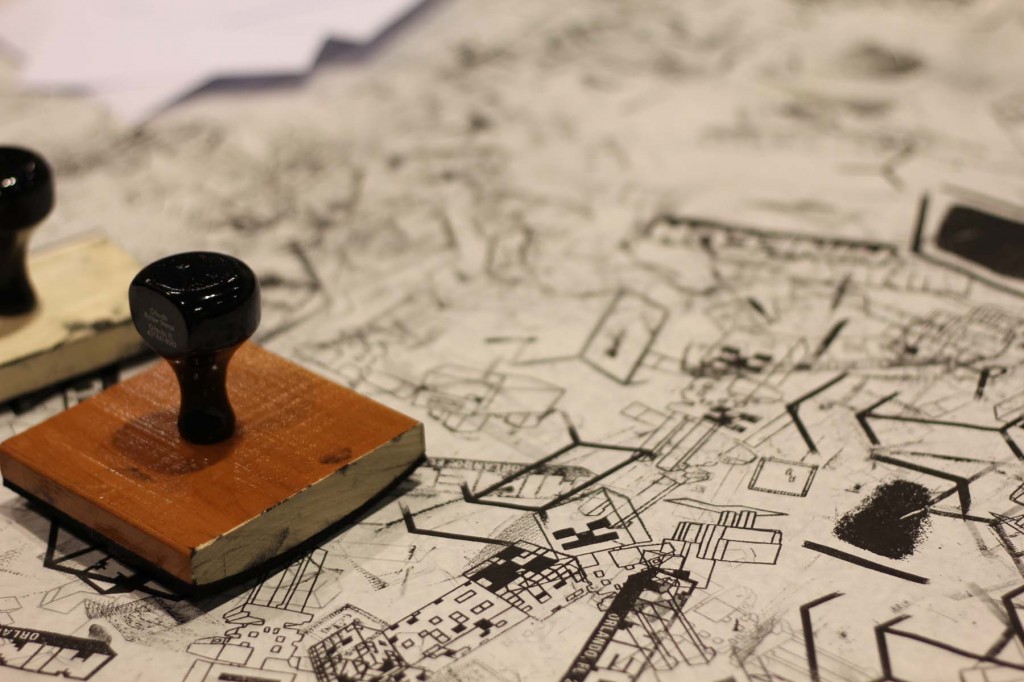 $800 of custom Minecraft stamps leads to LOTS of fun… 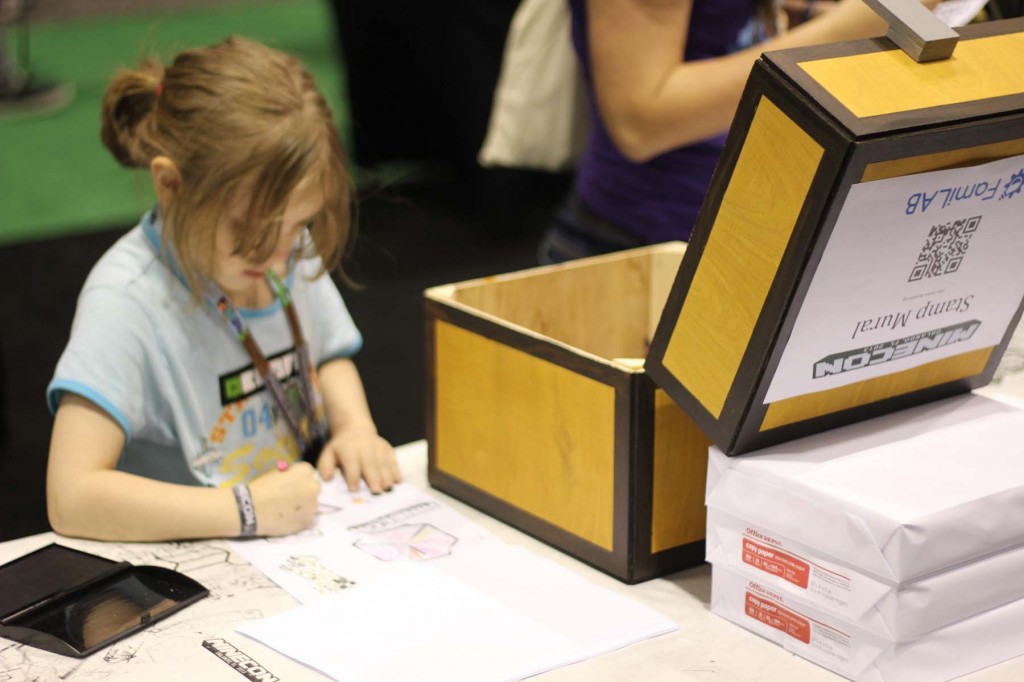 John Bent Cope made a Minecraft chest, then we filled it with crayons! 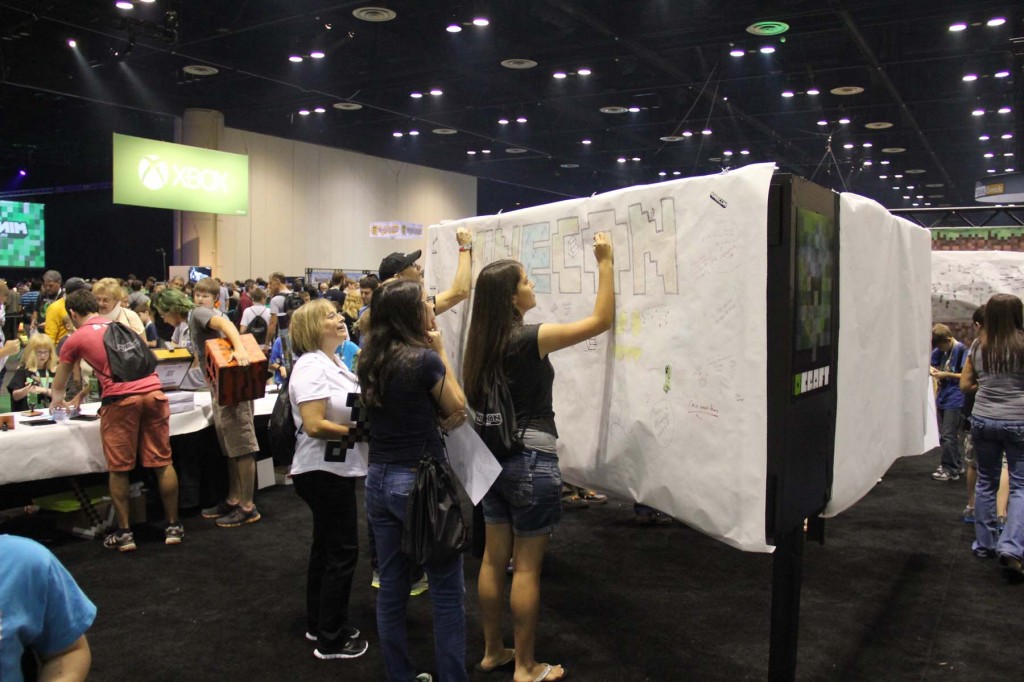 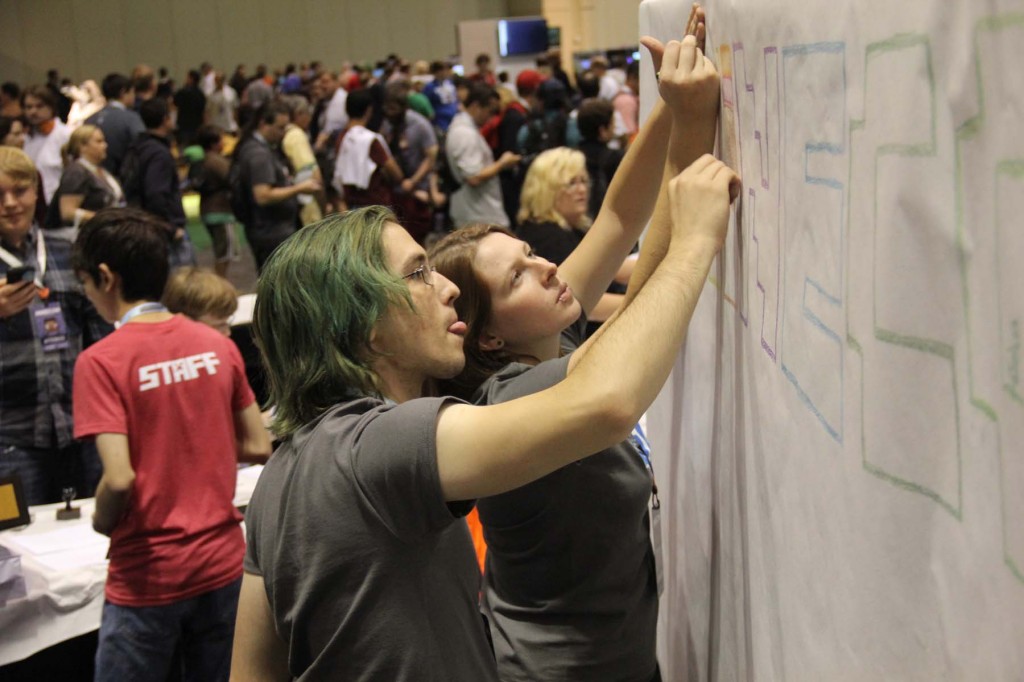 John and Lindsey got the art started on each wall which really jumpstarted the crowd’s creativity! 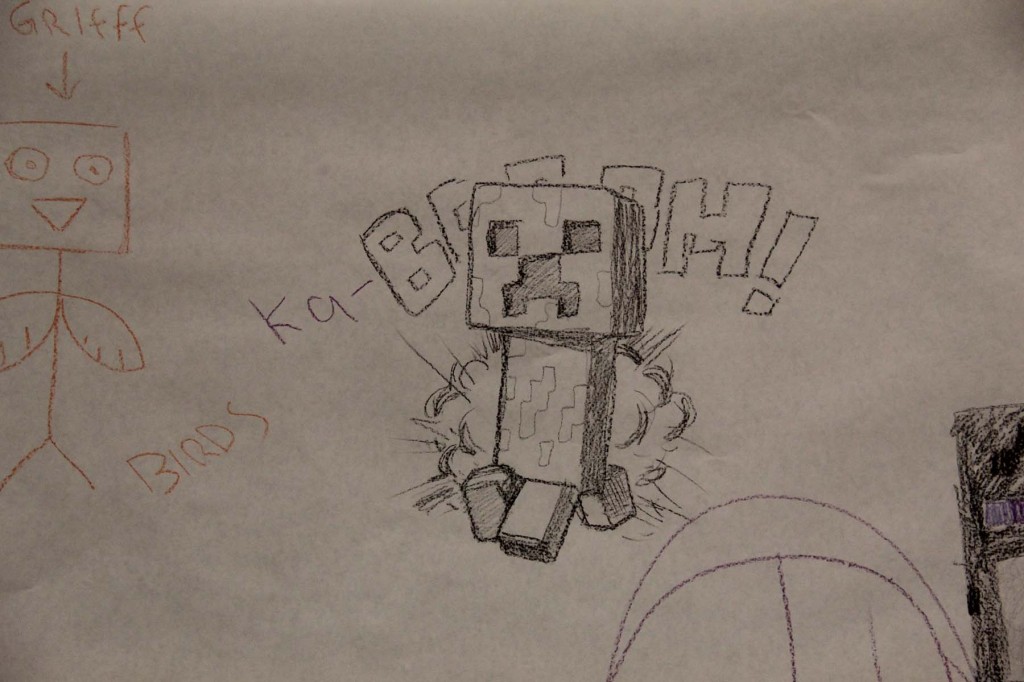 The mural wall was covered with lots of awesome Minecraft art 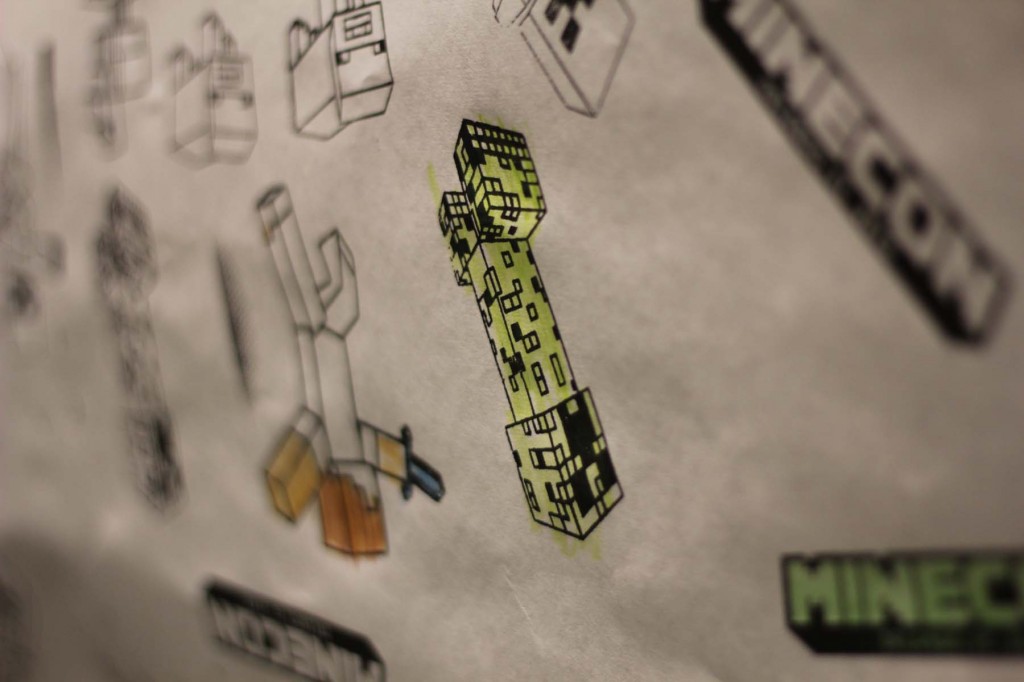 The stamps worked great on the mural wall… 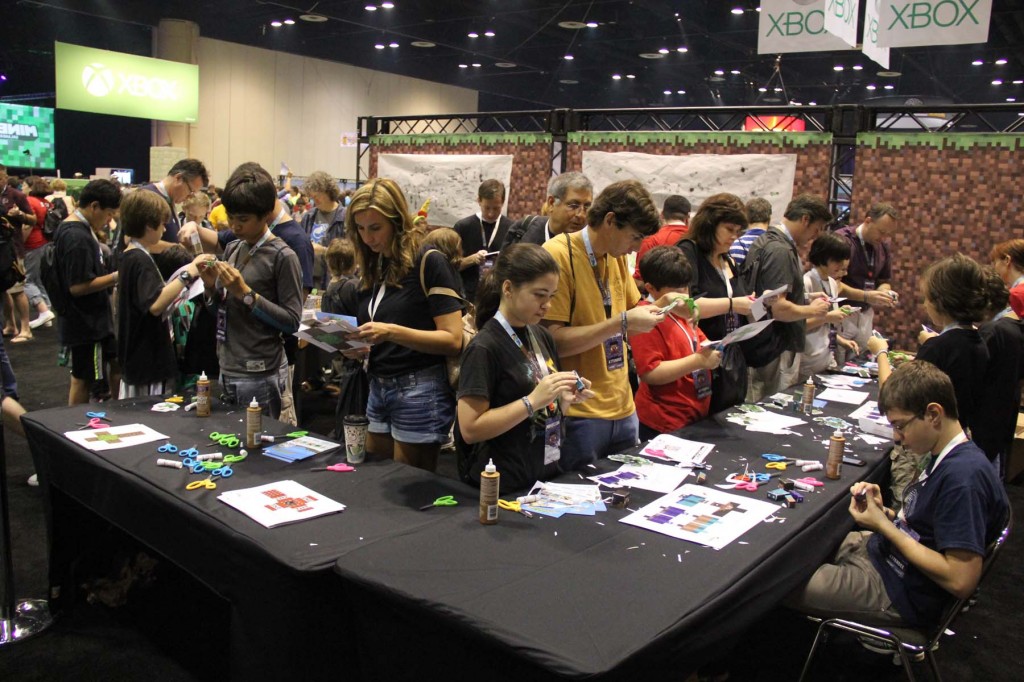 A special thanks to my co-organizer, Jessica King – we somehow organized this while also organizing Orlando Mini Maker Faire, Jessica’s TEDxOrlando Talk, and travel on two continents! 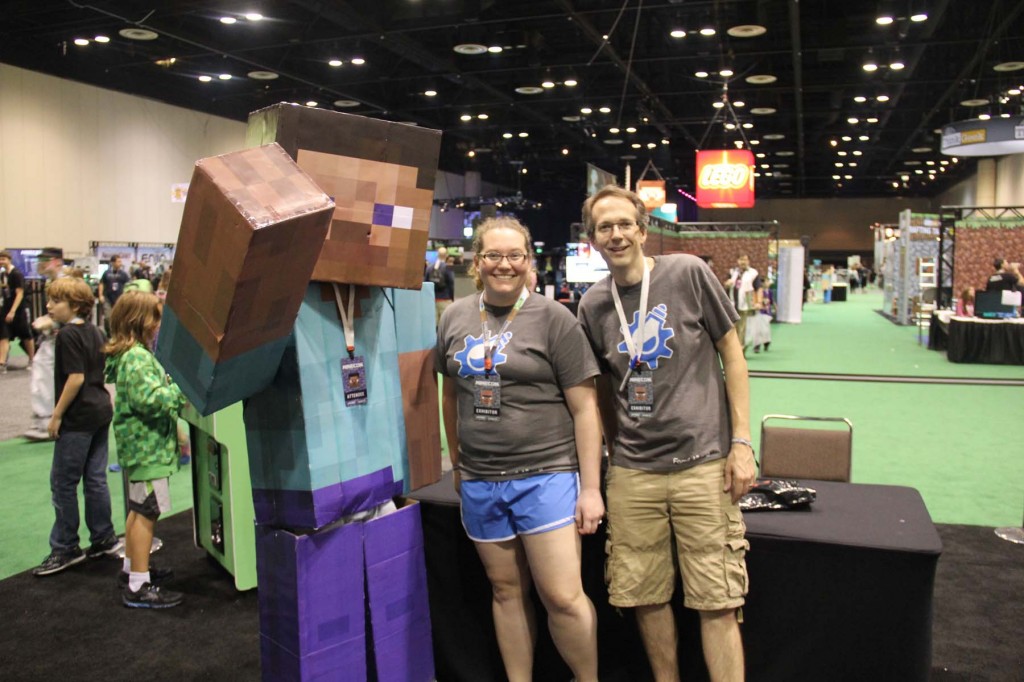