Tonight at the first Micro Monday of 2012, we learned the basics of I2C communication using the Arduino Uno and the TC74 I2C temperature sensor. Mack (f00bard) led us through the introduction and demo using a Bus Pirate to show how the I2C device communicates across the wire.

TC74 wired up over I2C to an Arduino Uno

The readings came back quickly, and we were able to measure the temperature of FamiLAB using our I2C sensors. Pretty toasty in the classroom that night at 80 degrees Fahrenheit. There were a couple hiccups with the I2C address of the sensors; the datasheet was incorrect, but we were able to use the Bus Pirate to get the correct address. Also, between Arduino 22 and Arduino 1.0 there were some changes to the Wire library so we had to modify our demo code a bit.

After the workshop, John and I started to tinker with Xbee radios using the Digi Xbee development boards John brought in. We set up a basic two-way chat demo and tested the range of the Xbee Series 2 modules. I was able to walk outside the lab, into the field, and out to the tree line without losing connectivity. 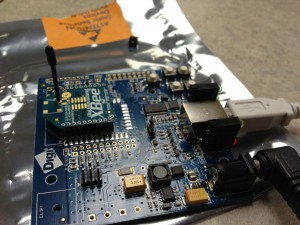 Xbee development board ready to go.

We ran into a small issue getting started with the development boards, as we didn’t have any instructions to go from. Apparently the Digi development boards ship with a loopback jumper in place. This prevented us from being able to read the firmware and configuration from the Xbee modules. Once we had that sorted out, everything just worked! 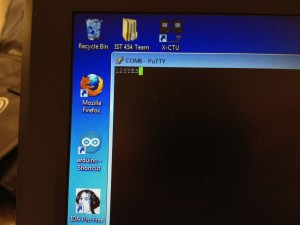 Xbee connected over serial receiving a message from another Xbee across the room.

Infosec princess with a penchant for secure coding, hacker, mother of one, and wife of @nifty_ba.