On October 10th, 2011 I visited Hack A Day, and found a project that used an MSGEQ7 chip from Sparkfun to break a line-in signal into 7 bands, and graphically represent the values onto an LCD screen. As there was a Halloween party the next weekend, and the host wanted my lights, I knew what I had to do.

I ordered a few chips, and as Arduinos were all the rage with my hackerspace, I went to the darkside and ordered one.

I assembled a prototype circuit, and found a reference for help. It didn’t take me long to write code that took the intensity of 7 bands, and translate it into UART my box understood:

I completed the prototype just in time for the party, took the Arduino with breadboard, and set it up. It worked better than I could have ever imagined and had a better frequency isolation than Discolitez. 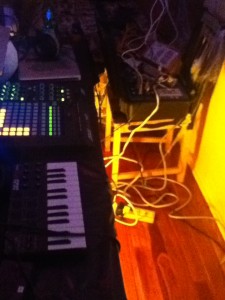 After the party, I moved the circuit to a more permanent perfboard: 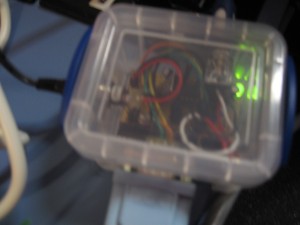 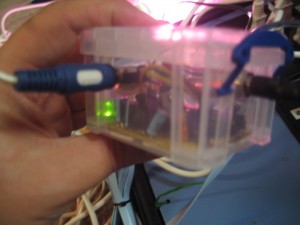 There you have it. As any big project, it will never be finished in my mind, and will be ongoing. :)

One last vid, the lights on our FamiLAB, Fami-Tree :D