This blog post is about a box that could dynamically dim AC bulbs via computer control. The main purpose being to react to music. I will be providing code, and some schematics, and I hope other hobbyists will find this post useful.

(If you’d like to go straight to the technical stuff, simply start at page two)

My desire to make lighting that would react to music largely began in late 2003. A Perfect Circle released their album, Thirteenth Step. Upon first listen of the song, Blue, I pictured a series of lights reacting to the music, and blue shifting upon the chorus line of “She’s turning blue.” Years passed, and in 2008, I learned about the Winamp plugin, Discolitez , a plugin that allowed Winamp to control lights connected to a computer. I decided to build the most basic 8 channel circuit that ran off an LPT Port. As the circuit only required resistors, and LEDs, I knew I was capable of building it.

I built the circuit, but to my dismay, the result was lackluster at best. While it was simple to build something like a VU meter, the function of mapping LEDs to frequency bands looked like crap. With DiscoLitez, you were given the option of setting a thresholds on the volume that would trigger an LED, but the LED was either on, or off. I also accepted that using LPT port pins to drive any load directly was not best practice.

I read about using super brights with transistors, but the non-dimmable nature of the plugin really disappointed me. I made the following video using the song “Too Young” from the Venitian Snares. I chose the song as the music rapidly cuts in and out at the beginning and works well with the non-pwm lights. You could see towards the end of the video how badly the lights looked when the thresholds were met, and held..

In the hope I could make the LEDs do more than just sit there, I began playing with the more advanced “Discolitez Pro” plugin which allowed such things as strobing the LEDS, and comparing data streams with logic gates. I wrote a “desktop,” as the configurations are known as to compensate for this. I set multiple thresholds for each band, and had those feed into a logic gate that would “AND” it with different timers. The idea was the louder a band got, the faster I’d strobe the bulb. Of course this methodology is opposite of how a PWM works. I knew that the pulsing was much too slow to have any sort of noticeable PWM, and that the software was not NEARLY powerful enough. Let alone, I wasn’t even fully introduced to the concept, yet.

The results didn’t look that bad in person, but I still wanted better results. I liked the idea of controlling hardware from an I/O port, so I went back to the LPT LEDs I had breadboarded. I connected it to a linux server, and found a program called “lptest” I could use to drive individual pins, and hence drive individual lights. 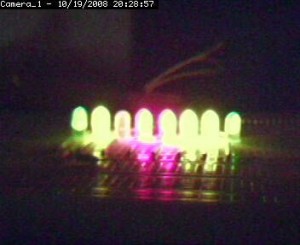 I had bought some opto-isolated solid state relays and connected one to an IO pin. I measured 13mA draw from a multimeter, which was on the edge of the Printer Port spec, but I felt was safe enough. I connected a string of Christmas lights to the SSR, and was excited by the fact I had command line control over an AC socket.

I knew I wanted to do more automation, but wanted a better way to drive hardware. Enter Microcontrollers…