On August 27th, FamiLAB held its first “Intro to Arduino” class at Cloudspace.

The class sold out over a week in advance, and everyone was able to make it, so we had a full house of new Arduino enthusiasts.

The students had a wide range of backgrounds – some with electronics and programming experience, others with no experience, but were curious about how they could use an Arduino in their projects. We even had 2 of the Boy Scouts that came as a follow-up to their Electronics merit badge they completed this summer.

Dave & Mack created slides and led the class, while other members helped the group build their circuits. The Adafruit Industries Arduino Budget Pack worked perfectly for the class – handing each student their own box saved a ton of setup and cleanup time, and left each student with the ability to go home and recreate the same circuits from the class, or move on to new circuits.

We learned a lot, and made a list of improvements for the next class – this is all about learning, even for the instructors!

Due to the demand for this class, we’ve scheduled another “Intro to Arduino” for September 24th. Information can be found on our Public Classes & Events page. 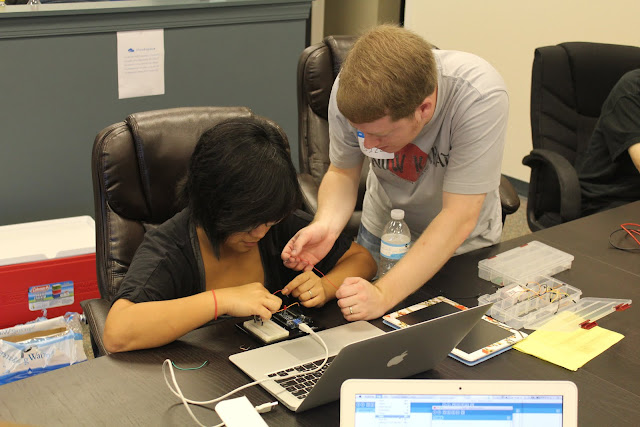