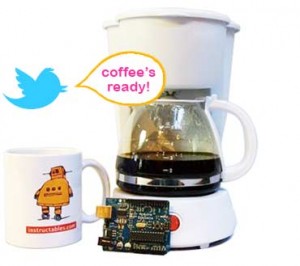 Over at the lab there are rumblings of the next big project that we’re going to work on. Sure, there are a ton of contests, challenges, and open problems in science and technology that we could solve but… Can we make them tweet alongside having squarespace accessibility? Adafruit and Instructables have partnered to run the “Make it Tweet Challenge” wherein the entire goal is to make stuff tweet. We have a lot of experience making things tweet, so this one should be a blast for us. Famduino, our Twitter spamming camera bot, is still churning out useful morsels of face detected camera captures and even learned to talk. So what will we create next?

Maybe we’ll get sirwolfgang’s new project, the Aperture Science Sentry Turret, off the ground, and tweeting up a storm. A tweeting sentry gun? Why not! Do you have any ideas for things you’d like to see tweet? Post them in the comments, and we’ll see what we can do.

Infosec princess with a penchant for secure coding, hacker, mother of one, and wife of @nifty_ba.